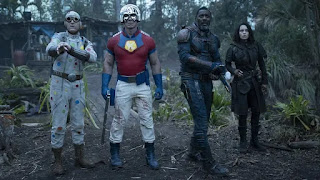 One of the biggest letdowns of the 2010's for me was "Suicide Squad." After many superhero movies that had hit the big screen up, I was ready for a movie about supervillains being forced to work for the government for shortened prison sentences. I was hoping for a different kind of comic book movie, because that's what you do with that kind of premise...something different. I wouldn't have minded a gritty movie. If anybody could have made this work, it was David Ayer. So what did Warner Brothers do? They panicked, stripped Ayer's vision for spare parts and just gave us another, carbon-copy "superhero" movie...except this time it starred supervillains. Hard pass.

I hope Warner Brothers is starting to see that if they give their artists the opportunity to fly, they make great comic book movies. Just like what James Gunn just did with "The Suicide Squad." James Gunn's film is basically the comic book version of "The Dirty Dozen," which is exactly what I want from a Suicide Squad movie. The worst of the worst supervillains are forced to work for the government. That pesky Amanda Waller (Viola Davis) always knowing how to manipulate the baddies with ease. All of this within the James Gunn anesthetic. Count me in.

"The Suicide Squad" is so amazing, you're going to be begging for a James Gunn DC Universe. I want that. Come on DC, make James Gunn the Kevin Feige of DC. You know you'd see your profits soar if you decided to do that. Make him the main producer of a DC film universe. Imagining where Gunn not only allowed each DC superhero to really shine, but also the bottom-of-the-barrel characters to shine as well!? Oh man, I long for something like that.

The film begins with Johnny Cash's "Folsom City Blues" playing as Savant (Michael Rooker) gets recruited into the Suicide Squad. The movie doesn't waste time introducing new characters. You get to know some as the film progresses, but don't expect a 30 minute Wikipedia information dump like the first film did. Some characters you'll only learn their names, you'll get to see them in action and then poof. They're gone. This is a movie that definitely makes the team live up to its name. Not everybody makes it out of this one, in fact, most of the team is dead by the end of the film. I loved the unpredictable nature of this film. There are character deaths that take place that I am absolutely shocked happened. I knew there were going to be deaths, but not THOSE deaths. I thought to myself, "wow, they really let James Gunn go there." But we are all richer for it. An unpredictable movie like this is exactly what we needed.

Joel Kinnamen, Margot Robbie, and Jai Courtney return as Rick Flag, Harley Quinn and Captain Boomerang from the first film. The movie plays coy about this really being a sequel, even if some of the players from the first film appear again. They are joined by Bloodsport (Idris Elba); an assassin you put Superman in the hospital with a kryptonite bullet, Peacemaker (John Cena) very much an anti-Captain America, Ratcatcher (Daniela Melchoir); who can control rats, King Shark (Slyvester Stallone); who is a giant walking talking shark, Polka-Dot Man (David Dastmalchian) who kills people...with dots, TDK (Nathan Fillion) who can detach his arms, Weasel (Sean Gunn) a giant weasel, Blackguard (Peter Davidson); a gunman, Javelin (Flula Borg); who can kill with a javelin, and Mongal (Mayling Ng) an alien. All have to go to the island nation of Corto Maltese to destroy a base working on a secret threat to world peace known as Project Starfish.

The mayhem and anarchy start right away, and Gunn barely slows down the carnage. His style of humor shines through and through here. Everybody does really well here. It will be hard for you to really pick a favorite of the bunch. Idris Elba is a straight up badass here. John Cena is surprisingly amazing here, I never knew there would ever be a day I'd love John Cena, but here we are. Polka Dot Man is a bottom-of-the-barrel Batman villain nobody remembers, so of course Gunn takes him and makes him the heart of the film. Along with Ratcatcher and Dastmalchian does some of his finest work here as Polka Dot Man. Daniela Melchoir is a real discovery here. Viola Davis plays Waller with much more malice here than before, very much the anti-Nick Fury.

The film is packed with cameos, both from the DC Universe and Gunn's previous films. (Look for Pom Klementieff moment, who played Mantis in Guardians of the Galaxy Vol. 2). As trailers have shown, Starro shows up and its an amazing scene with him in it. The only character complaint I have is the lack of personality with King Shark. Sly does a good job, but giving King Shark a dumb personality just seems very safe. Especially with all the personality he has in the Harley Quinn cartoon on HBOMax.

Where the film really works though is that this is a movie about supervillains, through and through. Even when the team gets heroic, those heroics are only a means to an end. The 2016 film had the supervillains turn into superheroes rather quickly. Their loyalty is to each other, a group of misfits who become a family because they don't have anything else. They aren't working for the world's sake, even when it seems like they are. While, Gunn does lace his film with humor, it's never overpowering. This is a story that merely takes place in a world with superpowered people and aliens and weird monsters and things of that nature. It treats those things as real, and sometimes the humor comes from taking something fanatical and making it mundane. The film is very clever and it puts character first in a spectacular way.

If you felt jaded by the 2016 film. James Gunn just made it up to us in a big way. This is the "Suicide Squad" movie we deserved in the first place, and people are going to love this one. As much as I'd miss Gunn's influence at Marvel, please allow him to make more DC stuff, he gets it. We need it.