Val Kilmer bears his soul in the unforgettable "Val" 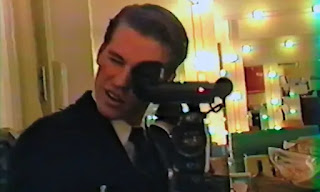 It may seem like a sleazy vanity project when an actor decides to make a documentary about their own lives. Or, when handled right, it can be the summation of a person's soul. Thankfully, we get the latter with "Val."

Even if you are apart of the Generation Z crowd, if you become a big enough cinephile, you will come across Val Kilmer eventually. He was a big name throughout the 80's and 90's, who eventually struggled to find work when it was deemed he was too hard to work with. He disappeared from the limelight by the mid-2000's, sometimes coming out of the wood work to star in a indie drama or two. The ruggedly handsome man ballooned to obesity. Then sadly, eventually developed throat cancer. Thankfully, Val Kilmer has survived his cancer, and he's still trucking along. Still attached to make an appearance in that "Top Gun" sequel that is still apparently coming some time soon.

Val Kilmer grew up in the heart of Hollywoodland, and he and his brothers were always making films of their own. Kilmer was one of the first stars who had a video camera when they were made, and he created seemingly endless home movies, and testimonials from all of the films he worked on. All of this footage used to tell the story of a man who loved movies and acting. This is the story of Val Kilmer. Whether you like him or not, whether you thought he was jerk or not. The truth is, you got the story that the media furnished for you. We sometimes forget that every story has two sides.

From what I gathered from this documentary. Val Kilmer was a man who was ridiculously in love with the world of film. So much so that he is relentless on himself and he was relentless on those around him and sometimes that can cause some tension, to say the least. I don't believe he did the things he did because he is a malicious person he just a very intense artist. I am not saying I excuse his bad behavior, he feels remorse for his own behavior. Understanding where it all comes from is the first step we make to bettering ourselves as people. Val Kilmer digs deep in these recorded memories, and rehashing the things he's done and what has come of all of it.

Val has mad respect for all the people he's worked with (except maybe John Frankenheimer, that's up for debate!) It's definitely inspiring to see a man who has been living his dream, seemingly from out of the womb. Also, living his dream for others in his family (His younger brother accidently drowned at age 15, he enjoyed making home movies with Val). No matter how big we get as stars or how big our heads get from working in the industry for so long, Val Kilmer proves that we never too big for self-reflection and watching a man throw it all out of there, to get his story out there is an overwhelmingly inspiring experience.

"Val" is not the movie I thought I needed this year, but something I am so glad I got this year. With all the down time COVID brought this passed year, it was a year full of my own self-reflection. It's always good to look yourself in a mirror and take inventory on what you've become and it can help you enormously. "Val" isn't just a beautiful summation of a man's career, its not just the x-ray of a man's life, it is lovely self-portrait of the rollercoaster of good and bad on the ride called life.

Posted by Shawn Hoelscher at 7:19 PM