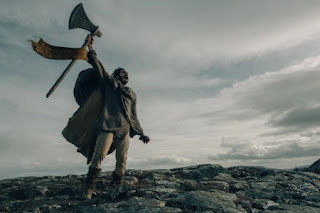 "The Green Knight" is easily my favorite film of the year so far. Possibly could end up being best, depending on how the rest of the year goes. It's imaginative, hypnotic, epic, and richly realized all in equal measure. It's an epic fantasy film told through the arthouse lens. It's "Lord of the Rings" or "Game of Thrones" in a box. It's weird, strange and disturbing. It's fanatical and radical and will surely keep your eyes glued to the screen.

Okay, hopefully that's enough adjectives for now. I just need to set the mood for this review. There was a time when fantasy on film was very silly. It depended on weird names, and lots of action and lots of zany silliness to make sure the audience knew they were watching fantasy. Even the best efforts of this genre, like "Lord of the Rings," also suffers from just a hint of silliness. Make all that silliness matter is why "Lord of the Rings" sticks out so well, but it's been a problem with the genre for awhile. If you thought "Game of Thrones" took fantasy serious, just wait until to you see "The Green Knight." This is a movie lathered in Arthurian Legend, with mix of modern epic fantasy with a wee bit of "The Seventh Seal" thrown in for good measure. Not to say that "The Green Knight" is pieces of other movies, Heavens, no. I just want to set the stage for what you are going to see. This will make you think and you will have to interpret the film in your own way. Which sometimes frustrates viewers. It's certainly not a trope that existed in fantasy films before.

As the next Christmas approaches, King Arthur insists to the reluctant Gawain to uphold the oath, even if the Green Knight is just playing a game. Gawain embarks on a quest to face The Green Knight. A journey that leads him to some shady scavengers, a talking fox, a lord whose wife looks exactly like his brothel lover Essel (Alicia Vikander), a ghost, and some giants. The film keeps a consistent mood of feeling kind of realistic, never feeling like our favorite high fantasy movies from the past. Like I said above, this is an arthouse version of an epic fantasy. It's strange but it is epic in equal measure.

How Dev Patel hasn't won an Oscar yet seems odd, but I am sure his career is going to upgrade after his incredible work in this film. Absolutely perfect from beginning to end. Ralph Ineson plays the Green Knight. He's a name you may not recognize at first. He's best known for his work on the British version of "The Office" but has appeared in supporting and background roles in such films as diverse as "Harry Potter," "Kingsman: The Secret Service," "Ready Player One," "Guardians of the Galaxy" and "Gunpowder Milkshake." His big starring role came in 2015 in "The Witch." He's poised to be star. He's got a tall, intense presence in films and he's got a rumbling, iconic voice that I can't believe he isn't more famous then he is. It's an incredible performance by Ineson and one in which I hope elevates his career. The film is full of great actors doing great work, including Alicia Vikander, Sean Harris, Erin Kellyman, Joel Edgerton and Barry Keoghan. It's well acted from a powerful ensemble.

Much will be debated about the film's ending and I don't want to indulge in spoilers in this review. If you are interested in a different kind of fantasy film, look no further. "The Green Knight" has left me dying to see it again. A shining star within a rather slow summer. And an early contender for the top of the 2021 releases.