The Ridiculous Summer continues with "America: The Motion Picture" and "The Tomorrow War"

Even though the world is opening up again, I'm still seeing lots of new movies at home. I'm a busy guy these days, so getting out to the theater isn't something that is quite easy right now. Plus, instead of having any sort of premium cable or special packages, I just have an internet connection and a handful of streaming services for myself. I think to myself, if I'm paying for all of these services, why not use them? The streaming services are still hard at work delivering content that you can see anywhere else. I think I can safely predict that due to COVID, the dynamic of entertainment and how we access it has changed, and will remained changed. The conglomerates are going to use these streaming services to their advantage every year. I think COVID saved the streaming wars from really taking steam. Maybe they could still happen, maybe the bubble might still burst. But it seems like this pandemic built them all to stay, and they will be used to the studios advantage. Accessing so much entertainment at home...maybe it was the future, and maybe that future got sped up.

We'll just wait and see how that all pans out for now...we are going to get into some more ridiculous summer movies you can enjoy at home.

What if the Revolutionary War involved George Washington being guided by Abe Lincoln's ghost? What if Benedict Arnold was a werewolf? What if the Big Ben could turn into an evil Transformer and it fought Paul Bunyan? What if science was used to get beer to turn British soldiers into American frat boys? Such is the ridiculous world of "America: The Motion Picture" a movie so bonkers that you need to see it to believe it. This obviously isn't our actual history, but I kind of wish it was, I wonder how weirder our beloved country would be if this was real.
The history of the formation of our country has been turned into an Avengers movie. Benedict Arnold kills Abe Lincoln, who is best friends with George Washington. George Washington then gathers a group of heroes; such as the beer guzzling Sam Adams, a science obsessed female Thomas Edison, Native American Geronimo, the blacksmith John Henry and the centaur Paul Revere. Yep, this is the universe of this story, and its the whole movie is complete nonsense. Your appetite for nonsense will determine if this movie is for you. Because its pretty non-stop and relentless, but if you are the right audience member, it will be for you. Or you may have to get drunk or high then watch, get some friends together and watch. Depending on mood, you'll really enjoy this or you'll hate every minute. 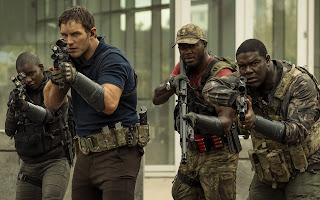 "The Tomorrow War" can be described as a little "Edge of Tomorrow," a little "Independence Day," a little "Black Hawk Down" with a tad bit of social commentary thrown in for good measure. You've probably got the premise down pat by now. Chris Pratt plays an ex-soldier high school science teacher. He comes home one night to a Christmas party at his house. He's got friends, a beautiful wife and daughter and an estranged father. Suddenly, while enjoying a soccer game, the game itself is interrupted by human soldiers who claim to be from the future. They talk about a future war where humanity is losing badly, and they need people from the past to fight to beat the aliens.
If the world captures these people and tries to figure out if this is real or not, don't count on it. That would take too much time and the movie needs to happen. Humans are swiftly drafted into service to fight a future war, after the world sends a decent chunk of their military into the future and they end up dead. Chris Pratt's character is drafted into service. He is quickly taken to basic training, which really isn't much. People are are shot into the future wearing kevlar and their street clothes and get a quick lesson on using a gun, then they are ready! It's still thirty years in the past, and if numbers are so dire, you'd think you'd train a bunch of Joe Schmoes for battle to save the world instead of just giving them guns and hoping for the best. It's a good thing Pratt's character was an ex-soldier, that way something in this movie can happen.
I bring up the "Independence Day" because, not a lot of personality is given to each of the characters. They have something special about them, a specific stereotype, that will be important to plot later on. Pratt wants to be a scientist really bad, and he can't get the job. JK Simmons plays his father, who he doesn't get along with until the movie really needs them to be family. In the future, Pratt's character meets his daughter all grown up played by Yvonne Strahovski, and during their meeting, Pratt learns some not so good things about his future. Of course, this all ends with a family being big and happy again because FAMILY! It's a good message don't get me wrong, but its so artificial in its execution that its a little laughable.
Where the movie really shines is its action set pieces. The moments of action are pretty frequent, and they are full of bangs and bombast. The aliens themselves are pretty wild looking. Since Paramount made this movie, I wonder if this film was ever in the running for being apart of the Cloverfield universe. (Die hard movie fans will get that joke) The cool visuals and tough-as-nails characters may be enough for you to love this movie. I liked pieces of the movie for sure. Chris Pratt is a capable performer. He shows great range I didn't know he had in this. The movie features an entire ensemble of good actors giving it their all. The idea of going into the future to beat some alien bad guys is a cool concept, but I think the execution wasn't handled as well as hoped. But if dumb summer fun is what you need right now, this should fit the bill perfectly.
Posted by Shawn Hoelscher at 6:00 PM