"Space Jam: A New Legacy" might shine for kids, but its a game worth missing 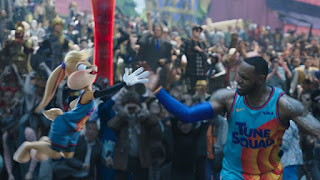 When "Space Jam" came out in 1996, I missed it in theaters. But I got it for my birthday the following year on VHS. I thought it was the greatest thing in the world and every Friday when I got home from school, I watched it.

I have watched the movie since, and I honestly don't think the movie has aged particularly well. When you don't have the 90's blinders on, "Space Jam" is a really weird movie where nothing makes much sense at all. Michael Jordan wasn't much of an actor, even though he was playing himself and it was pretty much harmless fluff, but I don't feel the same fun that I did when I was a kid.

Warner Brothers tried many years after 1996 to try and get a sequel made. Michael Jordan didn't want to return. So the studio tried to take things in a different direction. There was going to be a "Race Jam" with Jeff Gordon. They had an idea for "Skate Jam" with Tony Hawk. A golf version with Tiger Woods. And some kind of sequel starring Jackie Chan...yeah, I don't get that one. All of those ideas got dropped for one reason or another and it seemed that "Space Jam" would become an old relic of 90's pop culture and that's where it would stay.

But in the 2020's, pop culture has decided we are going to be living in a time constant nostalgia, and "Space Jam: A New Legacy'' takes that idea to the extreme with reckless abandon. Instead of Michael Jordan, we have LeBron James as the NBA superstar who has to play a game of basketball with the Looney Tunes. This time, they aren't playing aliens and they aren't going to space. But rather, LeBron and his son Dominic (Cedric Joe) get sucked into a Warner Brothers computer server, known as the Server Verse by a malevolent computer Program AI-G (Don Cheadle). So instead outer space its cyberspace!

Like many crappy sequels, "A New Legacy" is built on the same spine as the first film. We see a young LeBron in the 90s. He is playing a Game Boy before a game, he's so enthralled that his coach (Wood Harris) has to get his attention. Young LeBron has the chance to shoot the shot that will win them the game, and he misses. So he basically vows to get all distractions out of his life so he can focus primarily on basketball. Which helps him turn into the superstar he is today. His two boys are showing promise in basketball, his oldest is really into it. While his youngest son is very much a tech-savvy kid who can create his own video games. LeBron wants his youngest son Dominic to focus on basketball, while Dominic wants to chase his dream of making video games. They but heads here.

This argument flairs up until they are sucked into the Server Verse. AI-G takes Dominic away and allows him to work on a version of basketball that gives the player style points and power ups and other video game advantages and challenges LeBron to basketball game that Dominic creates. Inside the Server Verse is every fictional world WB has ever created and LeBron lands in Looney Tune world. When I initially talked about the trailer earlier this year, I made a joke about this being like "Ready Player One" as the Server Verse looks exactly how Ernest Cline describes The OASIS in his book. This leads to a bunch of Intellectual Property jokes, most of which aren't that clever. Honestly, Warner Brothers decides to make a movie showing off their IP every few years (just look at their LEGO movies).

With so many characters at LeBron's disposal, I am not sure why he is required to limit recruiting only Looney Tunes, other than the function of the film. They reference the first film, even though in the first film the alien planet was real within the universe and the Looney Tunes lived underground, making no sense whatsoever. The aliens from the first film even cameo in this. Kids will probably like this movie a lot, especially LeBron fans. There are plenty of characters kids will scream for. The several pop culture jokes sadly aren't that clever, but pretty easy. Kids will probably enjoy the wild energy of the film too.

For adults, the jokes sadly don't land. The story is the exact same as the first pretty much. As someone who grew up with the first film, this is a pretending copy. LeBron James is pretty wooden playing a version of himself and even though Jordan wasn't an actor, he brought a certain charisma that James does not. There is a nice message that family is everything. But the movie leans into the weird and wild moreso. I've seen people comparing this "crossover" to something like "Avengers: Endgame" but the characters in Avengers were built up carefully and each had part to play. If characters from different franchises simply waving in the background is enough to compare to "Avengers: Endgame" then I guess the future of filmmaking, even franchise filmmaking, is doomed.

Despite the flashy lights and the distractions. "Space Jam: A New Legacy" is basically another sequel, one I'm not sure anyone asked for.

Posted by Shawn Hoelscher at 6:06 PM