Loki is my favorite of the MCU Disney+ shows. Here's why... 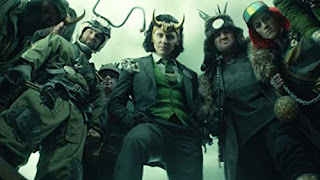 THIS REVIEW OF LOKI IS GOING TO CONTAIN SPOILERS!!! IF YOU HAVEN'T SEEN THE ENTIRE SERIES YET. READ AT YOUR OWN RISK!

All hail the God of Mischief baby!

The Disney+ MCU shows have been good up to "Loki." I wouldn't call "WandaVision" or "The Falcon and the Winter Soldier" great. I liked that "WandaVision" was good, but I think it could have been great if Marvel dared to just make Wanda's grief the villain, much of the last half of "WandaVision" seemed like a forced narrative to include some superhero antics, while it was entertaining, I feel like there was a cooler, more compelling alternative. "The Falcon and the Winter Soldier" was good, but for six hours, they simply tried to pack too much into the mini-series. I give Marvel the benefit of the doubt right now, because they are still playing with the six hour storytelling format. I have all the faith in the world that they will master it. It shows with "Loki," the show that I think is their first great Disney+ offering.

One thing I've liked about he MCU shows across the board is that they are built around mysteries. Many complain about the Marvel movies because they built from the same kit. The heroes are chasing a villain who wants a McGuffin and they have to get to the McGuffin first or stop the villain from getting to it. Certainly not all the movies follow that format but many do. The MCU shows on Disney+ have been built around mysteries. "Loki" has been full of intriguing mysteries. This show doesn't follow the Loki who got killed by Thanos in "Infinity War." This isn't some prequel. This show follows the Loki who stole the Tesseract in the middle of the Time Heist in "Avengers: Endgame." Loki wasn't supposed to take the Tesseract, so he gets arrested by the Time Variance Authority, a police force that exists deep within the multiverse to keep interdimensional travelers from messing with the timelines.

Getting confused yet? Buckle up, because the Marvel movies are going to get WHOOOLLLLEEE lot weirder than some intergalactic tyrant trying to obtain a magic space glove. For so many years, superhero movies had to act "realistic" in order not to scare away regular audiences, and I am happy that we have crossed a threshold that allows studios to really make any kind of comic book movie they want. The multiverse is a concept you find in both Marvel and DC comic stories. The idea that there are multiple Earths and multiple versions of us has the potential to be fun. "Loki" was definitely tons of fun. Especially when Loki is able to weasel into the TVA, become friends with agent Mobius M. Mobius (Owen Wilson) and help them capture "variants;" those people who are trying to mess with the continuity of the timelines.

First, Owen Wilson and Tom Hiddleston throwing down together delighted me completely. Such a fun duo and whoever thought to pair them together deserves a raise at Marvel. I loved every second they were onscreen together and I hope we see more of that in the future, as the "Loki" finale promised a second season. Second, this is where the mystery really begins to come into play. There are different variants...different versions of Loki. Specifically a female version of Loki named Sylvie. I never knew who Sophia Di Martino was before "Loki," but her work as Sylvie is top notch. She's going to be a star after this, because her work is really incredible. While Sylvie and Loki start out as enemies, she's trying to find out secrets behind the TVA, which of course draws the two together. Of course, nothing is what it seems at the TVA. Of course, it isn't run by those we think it is. When learning that the whole organization is made up of variants who are working for the organization against their free will, well, things get exciting and more delightfully weird moving forward.

How delightfully weird? How about meeting even more versions of Loki? I have been trying to guess who veteran actor Richard E. Grant was going to play in this show, and I have to say that his "Classic Loki" is much fun. I love the retro costume and his proper way of speaking when giving his backstory. Yes, I got a kick out of alligator Loki and Kid Loki. I cackled when I saw Throg trying to get his hammer or when we got a glimpse of Thanos' yellow helicopter. See, Loki eventually finds himself at the end of time, ready to get eaten by a giant void monster, a place where variants are taken when they are really in trouble. But of course Loki and Sylvia escape together and they finally meet who is really behind the TVA.

This is where things get interesting.

They meet He Who Remains, played by Jonathon Majors. You probably saw him in "Lovecraft Country," a show that should have got a second season. You probably saw him in "The Last Black Man In San Francisco" too. If you read movie news, you definitely read he was going to play Kang The Conqueror in "Ant-Man 3." Kang is an interesting character in the comics. He's a time traveling supervillain who has gone by many names over the years, which makes his identity kind of a pain to keep up with. But he's been a formidable foe against the Avengers for many years. He Who Remains explains to Sylvie and Loki that eons ago, there was a multiverse war between the many different variants of He Who Remains, had their war continued, it would have destroyed all of existence. The creation of the TVA was the only way to stop the war. He Who Remains gives the duo an offer; kill him and end the singular timeline, which will cause branch realities and much chaos The Ancient One talked about to Hulk in "Avengers: Endgame" or take over control of the TVA. Sylvia feels like her life has been a lie and doesn't believe He Who Remains, so she tries to kill him; Loki tries to stop her because he knows the chaos that ensues with timelines crossing and branch realities isn't good.

Sylvia is victorious though, He Who Remains is killed. The realities begin to create branches.

Kevin Feige wasn't kidding when he said "Loki" was really going to set the stage for the future. The MCU movies have been notorious for being commercials for the future, but the finale of "Loki" is clever in how they are setting up future stories without it feeling like a commercial, but something that has real stakes. The rumors we have been hearing regarding "Spider-Man: No Way Home" makes much more sense now. As does why Dr. Strange's sequel is about a multiverse of madness. Things are about to get really crazy. And I hope Marvel does a good job in continuing to introduce the general audience to the multiverse.

Aside from setting up some really cool stuff for future projects, the special effects in each episode is as good as you'd expect. The many great performances by Hiddleston, Wilson, Di Martino, Grant and others like Gugu Mbatha-Raw and Wunmi Mosaku are all great across the board. Jonathon Majors is electrifying in the series finale and what's fun is that he's going to probably have a completely different personality the next time we see him. Once again, Marvel has created lots of memorable characters, like alligator Loki and the animated Miss Minutes that people will talk about for many years to come.

But "Loki" wins me over because it was a tight mystery that kept me guessing all six weeks long. It remained constant, told one story through the finish line and now all bets are off. The best of the Disney+ shows so far.

Posted by Shawn Hoelscher at 6:22 PM