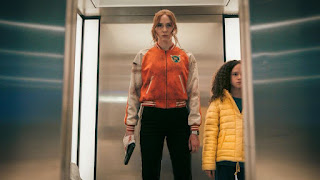 "Nobody" is still my very favorite, breaking the rules of the typical action film while also playing very blissfully with the rules. I also got a kick out of "Boss Level," a kind of "Groundhog Day" action movie. "Black Widow" and to a certain degree, "Zack Snyder's Justice League" proved that superhero action is doing just fine (though TV has been blowing it out of the water so far) and there is plenty of fun to be had with movies like "F9." Even if that fun is a little ridiculous.

Now, its time to enter the world of Girl Power action with a little Netflix film called "Gunpowder Milkshake." Featuring an all-star cast of lovely ladies that includes Karen Gillen, Lena Headley, Michelle Yeoh, Angela Bassett and Carla Gugino. These women are badasses. They've been in something awesome if you don't immediately recognize their names. This is a perfect cast for a movie like this and believe me, these women set off fireworks with their work in this film.

Karen Gillen in particular shines as the lead in this film. I've liked Karen Gillen a lot in what I've seen so far. Like Nebula in the Marvel Cinematic Universe films and the recent "Jumanji" movies. She's been great in lots of stuff so far. But much like Sigourney Weaver becoming Ellen Ripley or Linda Hamilton becoming Sarah Connor or Uma Thurman becoming The Bride, Gillen becomes Eva in a very special way that I think audiences will be blown away by.

The plot of "Gunpowder Milkshake" is pretty simple, and it may even be familiar. Eva is an assassin who got into this work because her mother (Headley) was also an assassin. Eva's mother abandoned her without an explanation, Eva feels abandoned whereas her mother really left her due to a job gone wrong. A grown Eva also kills the wrong guy's son on a job, which leads to entire criminal empire trying to kill her. She eventually saves a little girl named Emily (Chloe Coleman) who gets wrapped up in the plot because Eva killed her shady father. Eva must protect Emily and protect herself. She eventually rekindles her relationship with her mother, as well as her mother's friends who have helped in the assassination business.

So yeah, it's not an original plot by any means, but I'll tell you why that doesn't matter. The action scenes are so top-notch, in-your-face and feature moments that will make you cringe with delight. It's such an incredibly fun movie to sit and watch. It's got plenty of quick laughs, big action and even a few sentimental moments that don't fall short because the cast is on their game here.

When you've got Paul Giamatti playing Eva's shady boss, and Ralph Ineson being a crummy crime lord, you are in for a treat.

It's still summer time and that means watching fun movies. This is such a great entry into the action genre that if you care at all, you check it out now!

Posted by Shawn Hoelscher at 7:45 PM