The Devil Made Me Tell You About the Third Conjuring Movie... 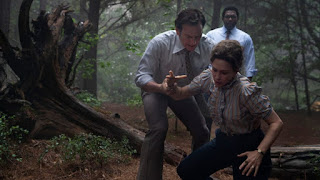 We are living in a time cinematic universes. While there are have been a ton that have tried to emulate Marvel, many have not been successful. DC went from trying to catch up with Marvel, and has instead resorted down to kind of doing something different, maybe. Universal tried it with "The Dark Universe," but "The Mummy" in 2017 was so bad that the Dark Universe was only one movie. Arguably, the second most successful cinematic universe next to the Marvel Cinematic Universe has been the Conjuring Universe. I bet one day what's going on with Godzilla and King Kong will get there, but for right now its Conjuring. They branched out into other franchises and they've garnered lots of fans. While "Annabelle," and "The Nun" and all are fine, nothing beats the scares of the first two Conjuring films.

The third film, "The Conjuring: The Devil Made Me Do It," may be a mouthful for a film title, it's based on an actual case from 1981. It was literally known as the Devil Made Me Do It case. It involved Ed and Lorraine Warren, real life demonologists who performed an exorcism on an 8-year-old. Apparently during the exorcism, Arnie; a family member, invites the demon inside of him so it will leave the 8-year-old. Later, Arnie kills his landlord, but it wasn't really Arnie apparently, it was the evil spirit forcing him to. Arnie was in some deep trouble in 1981, but the Warrens helped with the trial. Instead of the death chair, Arnie served 5 years for manslaughter. It sounds too wild to be a true story, but all of the Conjuring movies are based on actual cases regarding the Warrens. An actual recording of the real exorcism plays during the credits.

Patrick Wilson and Vera Farminga have become the Warrens at this point. There is a grace of realism in their performances. They make it real and authentic. Which is good, because this third film is easily the craziest of the films made so far. There is so much wild imagery on display that I wonder just how much of it was reality and how much of it was Hollywood exaggerating the realism.

The first film in the series is arguably the scariest, while the second film had some good scenes. I can't say I was honestly scared throughout much of this. Too much of a reliance on special effects, not enough of the tense imagery and shock value of the first two films. The story itself is very interesting, but this wasn't nearly as scary as the first two.

Posted by Shawn Hoelscher at 7:16 PM