Summer is ridiculously here with "F9" and "The Hitman's Wife's Bodyguard"

Many states are opening up now, and as movies like "F9" and "The Hitman's Wife's Bodyguard" get released, it feels like a post-quarantine summer movie season is here.

There is a scene early in "F9" where Tyrese Gibson and Ludacris are talking about all the missions they've been on over the course of the franchise. They take a moment to realize that over all the crazy things they've done, they don't have a scratch on them to show for it. "F9" is as ridiculous as this franchise gets, and it even tested my appetite for cheesy summer blockbusters. I still cackle at the realization that this franchise started as a gritty, realistic, neo-noir crime movie about street racing and has morphed into a no-nonsense thesis on nonsense. But I can at least find the charm when the movie takes the time to realize how preposterous a franchise they've created.

"F9" and "The Hitman's Wife's Bodyguard" really feel like a pair of summer blockbusters. Which I guess is perfect for now. They are both are stupid in terms of laws of logic and physics. They both feature humor that walks the line between clever and corny. They both feature crazy amounts of action. They also both feature terrific A-list led ensembles. How much you like either of these films will solely depend upon how much craziness you an tolerate and how much you turn your mind off. 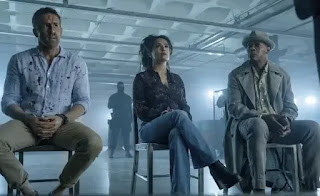 I like Ryan Reynolds and Samuel L. Jackson quite a bit. I can't really remember the one time I rented "The Hitman's Bodyguard." It was kind of fun for what I can remember, but as you can read, not very memorable. I didn't think it was something that needed a sequel. After watching the movie itself, I can tell why this didn't need a sequel. So much of it feels like treading water. Recycled jokes from the last movie. Memorable plot mechanics. Memorable humor. Just with Salma Hayek in the mix. I like Salma a lot, but she's not enough to save an otherwise paper thin action film. I think at this point Reynolds and Jackson can bring charisma into anything, and that at least makes what you're watching fun, but the movie itself as a familiar plot and of course, everything ends up okay in the end.
On the plus side, I do like that Frank Grillo shows up in this. I think he's on his way to being a leading star and he's showing that he can be loose and limber with the right script. He's not just a gritty tough guy all the time.
The mission statement of "The Fast and Furious" movies seems to be how can we be more ridiculous in the next movie. That becomes perfectly clear when the rumors end up true and the crew literally shoot themselves up into space to stop a satellite late in the film. Cipher, the cyberterrorist Charlize Theron plays is still at large here and she teams up with Dom's estranged brother Jakob (John Cena) to add some stakes. But when Han (Sung Kang) ends up alive and the explanation for why he's alive is flimsy at best, why does any death matter? Why even bother adding stakes at all if nothing those stakes provide matters? I don't really know how this franchise is going to keep me invested or expect me to care about this family onscreen if everybody can come back from the dead. And in speaking of coming back from the dead, this franchise has made it clear that one person in particular can't come back. And I'm not sure if it helps or haunts the franchise to treat one actor as some kind of shadow in the background. It's weird to me.
The bottom line is, both of these movies have summer blockbuster all over them. If you want to see some crazy car chases involving giant magnets, look no further. If you want three wisecracking hitmen stopping a destructive plot, look no further. Its going to depend upon the individual on whether or not you find either of these films charming or cheesy. Even though I've been a fan of the mindless fun that comes along with "The Fast and Furious" franchise, this latest entry has even tested my patience on the formula a bit.
Posted by Shawn Hoelscher at 7:52 PM