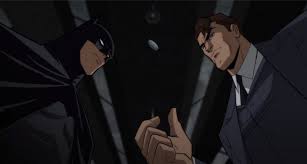 I'm not going to waste time sounding like a broken record. I've written hundreds and hundreds of words regarding my love for the DC animated movies. I don't love them all, but they are so good, so entertaining to watch. At this point, you may have jumped on watching them. They release a few direct-to-video each year. They bring some really good talent in for voice acting. They have made some of their own stories and adapted some great storylines from the comics. They have become a part of each year I look forward to as a movie fan.

This year has been a doozy. First, was "Batman: Soul of the Dragon" a Batman story that took place in the 70's and was told in the style of blaxploitation and 70's style kung fu films. It was so much fun. And now, available today, was the first half of the adaptation of "Batman: The Long Halloween." This is one of the greatest Batman comics of all time. We are finally getting an honest-to-God adaptation of it. Like I said, it is a doozy. Everything I hoped it would be so far.

"Batman: The Long Halloween" takes place in some of the early years in Batman's crimefighting career. It has even been suggested that "The Long Halloween" takes place on the same Earth as "Batman: Year One." The various mob families in Gotham City are trying to hold onto their power as the more colorful supervillains of Gotham begin to rise in power. The most powerful of these mobsters is Carmine "The Roman" Falcone, the character you may remember from "Batman Begins." Without warning, people connected to Falcone's criminal empire begin being murdered, always on a holiday. It starts with Halloween, then Thanksgiving, Christmas and New Years, another member of Falcone's crime family is killed. Even though Batman is in an alliance with Captain James Gordon of the Gotham police department and Harvey Dent, the district attorney of the city, to bring down the Falcone crime family, they must also find out who the holiday killer is.

If you know the history of these characters, there is quite of fun ahead of you. It's a great story of how certain characters are born and how Batman builds a persona that is to last for years. There are some incredible actors who provide their voices here. Including Jansen Ackles as Batman, Josh Duhamel as Harvey Dent, Naya Rivera as Catwoman (in the last role she'll have, unfortunately), David Dastmalchian as The Calendar Man, Titus Welliver as Falcone and Troy Baker doing a great Mark Hamil-like take on The Joker.

There's lots of good twists and turns here and there is quite the cliffhanger left as the film concludes. This is was just so much fun, and you should check it out.

Posted by Shawn Hoelscher at 6:07 PM