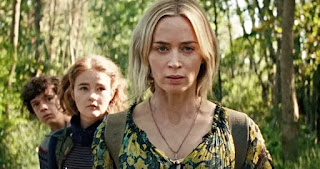 I was a really big fan of the first "A Quiet Place." The whole cast, across the board, were amazing in it. It proved that John Krasinski had an eye for directing. It was amazing telling a modern story nearly in silence. Most of all, it had some really scary parts in it. The entire stretch of Emily Blunt in the bathtub is probably one of my favorite moments in any scary movie in the last decade. I was really happy with the film overall and I was excited by the prospect of a sequel.

A sequel is exactly what we got. John Krasinski is once again directing. Krasinski co-wrote the first film with Bryan Woods and Scott Beck, and this time for the sequel, he is writing all by himself. He proves once again that he's got a remarkable eye. He can shoot scenes really well. He can bring some great performances out of people, even veteran great actors like Cillian Murphy and Djimon Hounsou. I think if Krasinski really wants a career directing movies, he's going to be just fine.

With all that said and with all do respect, I don't think "A Quiet Place Part II" really goes anywhere as a sequel. It almost doesn't feel scary. It doesn't have a single moment that even comes close to matching the bathtub scene in the first film. There is a cool opening sequence, where we learn (kind of) what life was like the moment before the aliens came to Earth. Why the aliens came and what their motive is, is never expanded upon. But it usually isn't in movies like this. I always find it fun seeing how the world fell apart in these types of movies, and its a pretty good opening scene.

Besides the opening sequence, I can't really say there's anything else really scary. There aren't any good boo scares and not much suspense, and I think that was the most disappointing thing about the movie.

Cillian Murphy plays an old friend of John Krasinski's character and he eventually meets up with Krasinski's family, Murphy knows of a place where other survivor's are. The family plan to go to this Survivor's colony, which is on an island. The aliens can't seem to swim very well. There, they will use the signal from the daughter's deaf earpiece to send an even greater signal to help fight the aliens. Okay, cool story, but it does end up feeling like a bigger version of the first movie.

The acting is still solid all around. There is still some fun to be had. But "A Quiet Place Part II" does indeed feel like a sequel.