I Have No Remorse For Hating "Without Remorse" 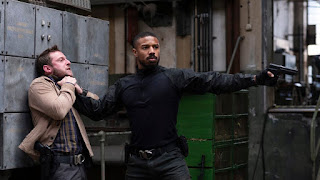 Tom Clancy was a very successful, very popular writer. I never cracked too many of his books, but my dad sure did. My dad introduced me to Stephen King and Tom Clancy, and I became the biggest King fan. My dad spoke very highly of both authors, so I figured Clancy knew his stuff. You wouldn't really gather that from Clancy's movies adaptations. The Harrison Ford Jack Ryan run is mediocre, so was "The Sum of All Fears" 2002, with Ben Affleck playing the titular character. "Jack Ryan: Shadow Recruit" seemed like such a generic spy movie that I couldn't really take it seriously. I really love "The Hunt For The Red October" and the Amazon Prime "Jack Ryan" series starring John Krasinski as Jack Ryan.

"Without Remorse" has nothing to do with Jack Ryan, but a different character that lives in Tom Clancy's universe. Michael B. Jordan is playing John Clark, and Michael B. Jordan is destined to be a star. You could tell that from "Creed" and you could tell that from "Black Panther" or any of the indies he starred in before landing in the "Creed" movies. He's got movie stardom written all over him. I love that he is willing to try his hand in directing, producing and whatever else he's choosing to do and wish him luck. I very much like Michael B. Jordan as an actor and I want to make that clear before I start dunking on his latest movie.

Yep. Sorry Clancy fans. Sorry Michael B. Jordan fans. But "Without Remorse" is not a very good movie at all.

"Without Remorse" is essentially a spy thriller action movie. I love spy thrillers. I love action movies. To each their own, right? For spy thrillers to work for me, the movie has to be making a point about the politics they are discussing. A critique, a compliment, just say something. "Without Remorse" is so muddled and so frustrating because it has absolutely nothing to say. It feels like a Cold War movie where we forgot that the Cold War has been over for a couple decades now. When a movie in which politics plays an important role in the storytelling, the politics better make sense. They also better at least try instead of being so ordinary. The United States government is corrupt and has done some shady shit in order to keep freedom and justice ringing? Stop the presses!

Where "Without Remorse" really bites is in the action scenes. If you make an action movie, and the action scenes are not exciting, not thrilling and I don't at least cringe away by how intensely authentic they are. I'm sorry then you've failed in my eyes. The action in "Without Remorse" is not exciting. It is not thrilling. It's pretty generic action. The characters are not totally fleshed out and they don't have exciting backstories, so it feels like there are no stakes. If we don't care about the characters, I don't care about the fight. Sure, John Clark lost his family to terrorists, so he's out for revenge. But, that motive is pretty played out at this time.

The action scenes of "John Wick" matter because the character is brought to life swiftly by Keanu Reeves and they make his backstory thrilling, and they set him up so tenderly before his entire life gets turned upside down. The action scenes in "The Raid" matter because when a group of everyday cops get hurled into an impossible situation, the actors have made us care about the cops enough that we want them to live, even though we know not all of them will. "The Rock" is one of my favorite action movies. Its a movie that can be called mindless entertainment. On a logical level, there are big moments that don't make sense. But that movie works for me because Sean Connery and Nicolas Cage are working overtime to make this very goofy movie matter and it shows. They care, so the audience cares as well. Any and all of this is missing from "Without Remorse."

The Marvel-style sting after the credits? Could have been cooler if the movie we actually watched was better. So many blockbuster franchises are designed like bigger, more expensive television shows. It'd be nice for once if you are making a modern blockbuster franchise to work tooth and nail to make sure that first film works. Reel us in with something great first, then build upon that.

It isn't enough to throw up some action that is cool-looking and for it to be enough. Maybe I'm weird, but "Without Remorse" feels ordinary in every way, and in a world where we have seen some incredibly intense action and meaningful spy thrillers, I need a little bit more than ordinary.