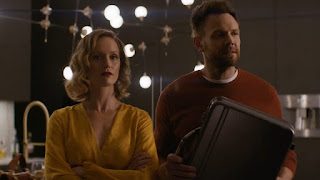 Have you ever been in love? Have you been married? Have you been married a long time or a short time? Is it everything our entertainment and our culture promised you? If the answer to the last question I asked is yes, then can you please explain how you got that to happen? Life isn't always rainbows and gumdrops, and relationships are the exact same way. We are constantly pushed in relationships, there is give-and-take and there is compromise. It's really the only way to make it work. All of that with trust.

"Happily" is about a couple you could only find in the movies. It stars Kerry Bishe and Joel McHale playing a couple whom seemingly hit it off at first sight. They have been married for 14 years and they still treat their relationship like they are in the beginning of the honeymoon stage and their a couple of teenagers. They never fight, they are always sweet to each other and their sex life is through the roof constantly. Their couples friends are so jealous to the point that their friends don't feel like they can honestly hang out with them any longer. How can you honestly make it work?

Kerry Bishe and Joel McHale are two actors I love unabashedly. I love just about everything Joel McHale has done so far. Whether in movies or his television performances, I think he really is one of the most unappreciated actors of his generation, he spins gold every time he steps in front of a camera, and his work here is just as good as he's ever been. Kerry Bishe is an actress you definitely recognize. Whether through "Red State" or "Argo," she's got one of those faces. She's also pretty unappreciated and she proves here just how much of a delight she can be in a leading role.

Bishe plays Janet and McHale plays Tom and like I said above, they have the seemingly perfect marriage. Then one day a weird, and I mean weird guy (Stephen Root) comes to visit them. This guy talks about some kind of error in their relationship and how they must take these two injections to make them normal again. He's concerned with their perfect marriage. He won't allow them to leave their home and claims calling the cops won't help anything and he could very well have superpowers. Janet and Tom are spooked to say the least, and Janet ends up killing the guy. They hide the body.

Janet and Tom are then invited by their friends, those who couldn't stand hanging out with them any longer, at a couples trip at a nice AirBnB for the weekend. They decide to do so to look normal, and they get the suspicion that one of their friends is pranking them. They want to find out if this was an elaborate prank or if something weird is truly going on. Each of their friends has a reason to mess with them, but they could be in serious trouble. So they must behave normal.

I wish I could keep explaining this film, but if you are going to enjoy for yourself, the explanation stops there. "Happily" is full of fun twists and turns. It has some real things to say about trust in relationships and how hard they can be. It's about how even the best relationships are tested when you're out in the real world and sometimes it feels like the world is working to test that relationship. The film co-stars Natalie Zea, Natalie Morales, Charlyne Yi, Breckin Meyer, Jon Daly and Paul Scheer, all of whom provide great supporting work.

The movie is left ambiguous. Not everybody is going to enjoy that everything gets tied into a nice bow. The film also kind of devolves into something that involves the who cast, so its weird that there is so much on Janet and Tom's characters and I think the ending would have landed better if the whole cast had some sort of focus. But this is the first film by BenDavid Grabinski, and its a very strong debut. I am looking forward to seeing what he has under his sleeve.

Posted by Shawn Hoelscher at 7:58 PM