I Actually Didn't Know Tonight Was The Oscar Ceremony 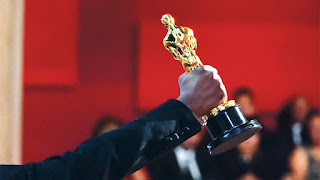 I was talking to my dad today and he mentioned the Oscars ceremony tonight and he asked if I was going to watch tonight. I honestly didn't even know that was happening tonight. By April, all of award ceremonies are done by now. I know the pandemic has moved things around a bunch this year, which is why we are having such a late ceremony this year. Its honestly a little shocking how much I don't care this year.
Actually, its really not. I haven't been looking forward to this ceremony at all. I think its really stupid how 2021 movies are intertwined with 2020 movies. 2020, by itself, was an absolutely great year of films. You've got plenty of choose from. As great as "Judas and The Black Messiah" is, it should be competing next year with other 2021 movies because...well...it's a 2021 film. If they are going to include "Judas and The Black Messiah" in the running this year, can we call it Best Picture of 2020 plus 4 months? This is something MTV started to do with their Movie Awards and it was just as dumb when they started it.
Its more than that though. I feel I've grown more cynical around awards shows the more I get older. I can't keep pretending like any of this matters. In years past on this site, I used to make predictions and it used to be fun. But those predictions, they were never based upon who I think should win. The reason why I used to do fairly well is because my predictions were based upon how well I think I knew the Academy. If you can willfully predict where the Academy is going to go in a particular category, you can do pretty well predicting Oscar wins. If you base your predictions on who you really think should win and still do well, then head to Hollywood, you belong in the Academy.
I guess it doesn't matter if they are going to shuffle 2021 films in with 2020 films or add movies from other years. Because the Oscars have never really been a measure of greatness of a full year of movies. I don't think. They may tell themselves that. But The Academy likes to present itself a certain way and the Oscars to me always was a time when Hollywood put on a big show and presented itself the way it wants to present itself. This is what they want to look like. And they put on a show every year. If you read enough movie news, you will read that some movies are made precisely to be "Oscar bait." Filmmakers make movies so that they can run for Oscars. How does that not come off freaking stupid to anyone else?
All the movies that are ever in contention for the Oscars seemingly come out between September through December. That is only four months out of the goddamn year. How can you measure an entire year of greatness based solely on four months? Four months out of twelve months. That's not weird to anyone else? It doesn't help that they are mostly uplifting dramas or movies about a certain social or political issue. Look, I am not trying to say that those movies don't matter. They do. Trying to say something with your art is great to me. Especially when it works. There are plenty of Oscar Bait movies that I love. But to not look at an entire year as a whole and ignore entire genres because they aren't "good enough." It doesn't seem like the proper measure of a year to me.
People went pretty crazy in 2008 when "The Dark Knight" didn't get nominated for Best Picture. I can already guess that The Academy wouldn't allow some superhero movie in on such a prestigious award nomination because the Oscars are above superhero movies. If anybody ever took the time to analyze "The Dark Knight," they would see it as a wonderful allegory of 9/11, investigating how we changed as a world from that terrible day. It's a great morality play. It puts its characters through the ringer. If "The Dark Knight" was just a crime movie, it probably would have been nominated. But lots of people were pretty agitated by "The Dark Knight's" absence. So do you know what the Academy did the next year? Bumped up the Best Picture nominees from five to nine!
Because that's the answer...
I'm sure some year, I'll watch the Oscars again. Maybe. If they are going to start mismatching years up like they did this year, I don't know if I will watch them again. I do hope every year though that they will treat each year with more respect. That they will see value in all genres for all movies that come out over the twelve months of a year. That they stop catering to films made by specific directors simply for the Hell of it. The Academy doesn't need to line with my tastes specifically, because that would be impossible. But there are so many movies out there, so many great ones. My top 1000 that I published over the summer gave you a guide to films of all kinds and genres. There is greatness everywhere and if The Academy starts to recognize it, maybe I'll start watching again.
Posted by Shawn Hoelscher at 6:11 PM