Falcon and the Winter Soldier Review 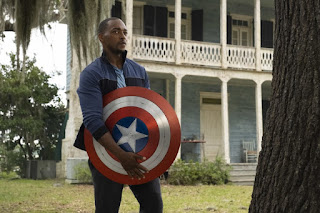 Captain America comics are generally more serious toned. They can be a celebration of American ideals or they can be critique of them, depending who is writing the story and what the story is about. Back in 2011, it was tough to tell where the Captain America film franchise would go. I love that they remained comic book accurate and told his story at the beginning of World War II. But I couldn't tell if his movies would be based on real history or a happier, lighter history that Hollywood would make up. When Disney bought Marvel in 2009, one could have guessed where the Captain America movies were headed.

I shouldn't have worried. But I wouldn't have guessed in 2011 that the Captain America movies would be my favorite trilogy of the Marvel Cinematic Universe so far. I think superhero movies, by and large, are fun. There aren't too many I'd call great simply because of the limitations of the genre, everything has come down to those putting their costumes on and fighting each other. I am not trying to say fun is bad. There's plenty of movies I like a lot and watch vigorously simply because they're fun. I plan to write about why fun isn't bad in my next article. The superhero movies I consider great are those that illuminate something, or don't depend so much on the superhero formula. I always felt that the Captain America films did that.

I also happen to be a sucker for political thrillers, which is why the trilogy appealed to me so much. I am glad that the tradition is kept in "The Falcon and The Winter Solider."

The TV show formula for Marvel on Disney+ has been good so far. "WandaVision" was lots of fun, and I loved that it went in a delightfully weird direction. The thing that keeps "WandaVision" as fun and not great in my mind is that dependence on formula though. It was a great story about how we handle grief that a superpowered threat really wasn't needed. But that wouldn't fly apparently in a Marvel show. It didn't derail the show at all. "The Falcon and The Winter Soldier" suffers from wanting to tackle too much in only six hours. Systematic racism, survivor's remorse, how the world changes and the political and social repercussions of those changes...those are all interesting ideas to tackle in a superhero show. Now take those ideas and add backstory's to its lead characters, introduce new characters, explain said new characters...before you know it, you've got lots on your plate.

For example, Bucky Barnes (Sebastian Stan) befriends an elderly man, and what the elderly man doesn't know is Bucky killed his son as collateral damage during a mission as the Winter Soldier. He wants forgiveness, but he's still in turmoil over his past. This subplot is given lots of attention in the first episode, get ignored for the next four episodes, then is conveniently concluded with the snap of the fingers in the series finale. Simply because there is so much going on in the rest of the show.

The bulk of the story comes from Sam Wilson (Anthony Mackie) coming to terms with what happened to Steve and if he's really ready to take up his mantle. Also, when The Avengers gathered the Infinity Stones and reversed Thanos' snap, it brought everyone back to life. This has caused some radical economic and societal changes throughout the world (Because of course it did), which has rubbed many the wrong way. This has paved the way for a terrorist group called The Flag Smashers to emerge, who want to create a world without countries and borders and boundaries. This leads to America to create a brand new Captain America in the form of John Walker (Wyatt Russell), the thing is, nobody can really do Steve Rogers like Steve Rogers. Well, Sam certainly can, whether he realizes it or not, which is why Rogers picked him as his replacement. But Falcon and Bucky go on an adventure of their own to reason with The Flag Smashers.

Sam really is a great replacement for Steve Rogers. There is a great line early the show by Zemo of all people. Daniel Bruhl returns to the MCU as Zemo when Bucky decides they will need his expertise in Sokovia looking for the Flag Smashers. Zemo says there was nobody else like Steve Rogers, and its true. Its why he was able to lift Thor's hammer.  Rogers' superpowers didn't come from the super soldier serum. He already had superpowers before, he was a perfect moral compass. He always has the right thing to say, always the moral high ground, always knows what's right. All of that simply got amplified with the serum. Sam slowly begins to become that same man in this show, and he doesn't have the serum to amplify his good deeds. He may have a goofy looking suit by the end of the series, but hey every hero in the MCU gets some upgrades sooner or later. So will Sam.

Sam and Bucky's journey's to being better men could have been a lot for one series. But they pack in lots in these six hours. Erin Kellyman plays Karli Morgenthau, the leader of the Flag Smashers, and it seems like her motives are all over the place and change like the wind. John Walker slowly becomes an unhinged version of Captain America, a representation of what we look like at our absolute worst, but his character goes through some radical character changes in a short time. It is also told that Karli has some sort of pact with a shadowy figure known as The Power Broker. The Power Broker in the finale is revealed to be Sharon Carter. Yep, that nice girl who looked out for Steve Rogers in "Captain America: The Winter Soldier" and stood up against HYDRA and aided Steve in "Captain America: Civil War." Yep, that girl. If you thought the sudden reversal of Daenarys Targaryen in "Game of Thrones" was bad, just wait until you see how they treat Sharon. Sure, some lip service is paid to how she was treated as a traitor in the time after her appearance in "Civil War" but there should have been much more development of her character to make us believe she had suddenly turned heel.

While it feels like "The Falcon and The Winter Soldier" bulldozes along, it's still a ton of fun. The action in the whole series is outstanding. Introducing cool characters like Battlestar and Isiah Bradley was great, and how they represent metaphors for American history only added to the enjoyment. Probably the most shocking reveal was Julia Louis-Dreyfus appearing as Contessa Valentina de Fontaine. Valentina is an on-again/off-again hero in the comics, and once dated Nick Fury. Marvel has a knack for digging up obscure characters and breathing great life into them, and that certainly happens here. And man, Julia Louis-Dreyfus playing the character makes it all better. The show is action packed, filled to the brim with kinetic energy. Anthony Mackie and Sebastian Stan make a great team, and how their characters grow through the series is marvelous. There is a discussion in the fifth episode between Bucky and Sam which is one of the highlights of the entire MCU so far. A discussion where Bucky didn't quite understand what it would mean if the world had a black Captain America, and Bucky ends up apologizing to Sam. Anybody who doesn't understand what it means when black Americans accuse White Americans of having privilege should owe it to themselves to watch this series precisely for that episode. There is quite a bit that Marvel is trying to illuminate here, and black American history is not the same as white American history which made this series particularly compelling.

There was lots to like and even love about "The Falcon and The Winter Soldier." I am thinking that this might actually be a series. Marvel has made it clear that "WandaVision" is a miniseries, and it feels like one while watching it. I feel "The Falcon and The Winter Soldier" was designed to be a TV series, which is why maybe not all the knots get tied by the end. There is certainly room to expand upon quite a bit and seemed like Marvel was shamelessly leaving us on the hook by the end here. Or perhaps it will lead into the fourth Captain America movie they just announced today. Could be anything and it will be fun to speculate.

"The Falcon and The Winter Solider" was good. I liked it a lot. I just wished it would have slowed down just a little bit at times.

Posted by Shawn Hoelscher at 7:26 PM