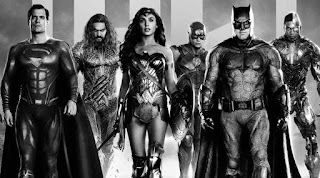 I've said it before, and I'll say one last time, the reason why "Zack Snyder's Justice League" exists should be reason enough to celebrate. It's great what can happen when the fans of something are listened to and they get exactly what they want. Most times, when studios buy intellectual property, we get what THEY think we want, instead of what we'd actually like to see. Sometimes its good and sometimes it is not good and that's the gamble of filmmaking. So it's great we are getting something rabid fans asked for. On an artistic level, its also great that a director got to fulfill the vision he had for a particular story and characters. Making something on your own terms is, surprisingly, not as common as you think. Not in mainstream Hollywood. So when an artist gets to unleash themselves on something that has been in their head for years, surely that's exciting.

For better or for worse, "Zack Snyder's Justice League" was going to be a lauded experience. There is a certain group of fans that got this movie made, and they are a very vocal group of fans. Fans that are unfortunately not very welcoming to other opinions. On one level I dreaded this day, but that toxic fandom is the fandom's fault, not the movie's fault. So I did want to know how Zack Snyder's four hour epic worked as a movie.

I don't think the movie gains anything by being rated "R." The restricted rating never means blood and cursing, at least not always. A movie with an "R" rating usually means its an adult movie about mature ideas. When you basically have the bones of the same story as before, but just told in a slightly different way, I can't say it elevates the material to being more adult. Despite what DC fandom will try and dress this as, "Zack Snyder's Justice League" is just like every Marvel movie and most modern blockbusters coming out these days. The good guys are trying to stop a bad guy from getting a glowing goober (remember Enter The Spider-Verse?). That's really all the story amounts to. If you think a movie is "mature" or "adult" simply because Cyborg and Batman say fuck a few times or because Batman impales a parademon, then I guess that means it earned its "R" rating, but this is very much an adolescent's version of an "R" rated movie.

Zack Snyder is just a film director in my eyes. There are movies by him that I've really, really liked. There are also movies he's made that make me scratch my head in bewilderment. He's not my favorite working in movies right now, but he's far from my least favorite. I've read enough of his interviews to know he loves these characters, and he thinks their awesome. I don't think that thinking something is awesome is enough license to adapt something, but he's got lots of heart. There are moments in "Zack Snyder's Justice League" that did make my heart swoon. First of all, Cyborg and Flash (and like I said above, Steppenwolf) are fleshed out as characters. That's important, because they are the only two members of the Justice League that we only know from this movie. You really get a feel for who they are as characters, and their motivations are fleshed out. Something that you simply can't get in a two hour movie.

Jared Leto's Joker probably has as much screen time as he did in "Suicide Squad." But I have to say, that all those Leto haters after "Suicide Squad" are going to shut right up after they see him here. This is the Leto Joker we deserved. Remember watching "The Dark Knight" being fixed on Heath Ledger in every scene? Same thing in the Joaquin Phoenix movie and even the 1989 Batman? Well, Leto's one scene in this movie, you won't be able to pay attention to anything else. Jared Leto is fucking amazing in his one scene. Yep, you read that right. He's amazing. Leto has always been a great actor. Sometimes, a script stunts you as a performer. Leto delights here, just delights. This is a version of the Joker I'd pay to see over and over.

I've always liked Gal Gadot as Wonder Woman and I've always liked Ben Affleck as Batman. Yes, its true, Ben Affleck is a fine actor. He's a good Batman. When he's working from a good script, he's a terrific performer. Gal Gadot and Ben Affleck together are always great to see in this movie. I'd happily pay for a Ben Affleck trilogy with J.K. Simmons as Commissioner Gordon, Jeremy Irons as Alfred, and yes, unleash Joe Manganiello as Deathstroke. All of these actors show up in this movie in some form and I enjoyed all three of them. The various supporting cast is all very good here.

It doesn't matter if you are watching the 2017 Joss Whedon film or the Zack Snyder's version, there are mechanics to the story telling that never win me over completely. I don't understand why Batman goes from Superman's main enemy to calling him a symbol of hope dramatically because his mother shares his mother's name. While Steppenwolf's personality is an improvement this time, his lack of personality from the 2017 film was given to Darkseid. Darkseid is such an ordinary supervillain in this film. He wants to conquer Earth because he's a conqueror and that's what he does. End of character. Plus, the design of Steppenwolf, Darkseid and the parademons is so heightened and cartoonish that I never found any of them threatening. Sure, you could say the same thing about Thanos and Marvel villains. But the difference is that the Marvel movies are so self-aware that I buy that world. When you have a story about a bunch of superheroes stopping a supervillain from using the Mother Boxes and make this dreary film and take it overly-serious, well that comes off ridiculous. It comes off even more ridiculous when you add a bunch of poorly rendered blood effects into the action scenes, just to justify that "R" rating.

Oh and Martian Manhunter showing up? He has two small scenes and that's it. Not the exciting introduction you'd want by any means. He's not featured in any of the big or important scenes in this movie. He shows up to talk to himself then talk to Bruce Wayne, then he flies away. Nothing exciting sadly.

So in the end. It's the same story as the first film. I wouldn't really call this a "new movie." But if you've read Snyder's interviews since 2017 and read his plans for the Justice League trilogy he pitched to WB many years ago, you can see where this story was headed in his brain. So I guess that's kind of cool. I would say given the Knightmare extended scene in this movie that I'd be down to see what else Snyder had in mind for this story and characters. So I guess for that reason alone, you can count this as a win. The action scenes are longer. Some of the characters are more fleshed out. There is so much exposition due to the long run time that you may sometimes mistake the screenwriter for George Lucas. But other times, the dialogue is better than the previous movie. The story really has time to breathe instead of bulldozing through development due to the shorter run time.

"Zack Snyder's Justice League" is definitely the Justice League movie I will return to for pleasure. But is it a masterpiece? I don't think I'd give it that high a praise.

Posted by Shawn Hoelscher at 7:38 PM