Because movie theaters aren't quite open to full capacity yet and because the studios are taking their time and being cautious about their releases, watching new movies at home has been a new normal for the last year now. It's crazy to think its been a whole year of COVID-19 and I'm hoping everyone can get the vaccine as soon as possible. No matter what happens, we are still getting new films at home, and its working so far as an alternative to the movie theater. 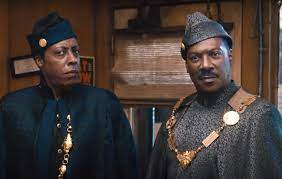 "Coming to America" is one of my favorite films of all time. Any time a sequel is made over 30 years after the original came out, I am always cautious. I want so bad to like "Maverick" when it comes out, but there is also some hesitation. It's easy to be away from something so long that the new result doesn't live up to expectations. "Coming 2 America" is not better than the original, but that's okay. It's still wildly entertaining.
Eddie Murphy, Arsenio Hall, Louie Anderson, James Earl Jones, and Shari Headely all return from the previous film. Akeem is still a prince, but his father is close to death. Because Akeem has fathered three daughters, the royalty is at risk of reverting to another royal family once they marry. Unbeknownst to Akeem, but known to Semmi, Akeem hooked up with a girl in Queens (Leslie Jones) and fathered a son (Jermaine Fowler). Akeem and Semmi return to Queens, New York to track down his son. Akeem is successful, and his son comes back to Africa with him, and learns the fine art of becoming a prince. But his son is his own man, growing up in America, and he's got his own ideas for his new country and newfound royalty. Which could butt heads with Akeem's long lasting tradition.
"Coming 2 America" definitely features some sequel-idis, it features many of the same story threads from the first films. But it does a good job of updating for a more modern world. The original cast fits right back into this world, are all very funny revisiting their roles. The additions of Fowler, Jones, Tracey Morgan, Trevor Noah and Wesley Snipes add to the movie as well. Being PG-13, it isn't nearly as raunchy as the original film, but the film is able to side-step much of this with aplomb. What's clever is the movie feels raunchy at times without ever really tipping into that kind of humor. If that makes sense at all.
It's hard sometimes to really tap into the magic of something old. But sometimes, that doesn't really need to happen. There is plenty of fun to be had with "Coming 2 America," and it was really enjoyable to see these characters I love once again.

The "Groundhog Day" affect is quickly becoming a cliche in this business. We are seeing quite a few movies these days of people repeating the same day, over and over again, determined to break the cycle. Because this isn't a new idea, for me I like to see how entertaining something can be, and how it can play with expectations. I'm looking at execution over originality, and I have to say "Boss Level" is a mostly satisfying action thriller.
Frank Grillo is an actor I have admired for sometime now. I think he's been ripe for a leading role for quite awhile now. I am glad director Joe Carnahan gave him a chance, because Grillo proved that he can lead with the best of them. In "Boss Level," Grillo plays Roy Pulver. A typical ex-military, alcoholic who has an ex-wife and a child he barely knows. Every day he wakes up to shady people trying to kill him. There is a playful attitude to "Boss Level," as Roy is continually narrating his life, trying to piece together this mystery, spewing corny joke after corny joke to anybody who will listen. This definitely feels like an 1980's action movie made in 2021.
A ton of fun actors make their way through this film. Including Naomi Watts, Mel Gibson, Michelle Yeoh, Ken Jeong, Annabelle Willis and Will Sasso. Also look for Rob Gronkowski in a particularly funny cameo and Frank Grillo's own son Rio playing his son in the movie. Joe Carnahan is like Michael Bay, so get ready for a bunch of crazy mayhem and characters that could only exist in the movies. Like many other Carnahan movies, he over-extends his plot for no reason. Sometimes the film feels a bit overly-long and acts as if its trying too hard to be clever, something Carnahan hasn't got over quite yet. But there is still plenty of fun to be had here.
I also caught "The SpongeBob Movie: Sponge on the Run" It is thoroughly ridiculous.
I am able to catch quite a few movies since so much is getting released at home. So expect big reports like this in the future.
Posted by Shawn Hoelscher at 5:49 PM