That's a wrap on WandaVision (SPOILERS) 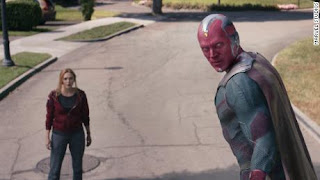 THIS POST WILL CONTAIN SPOILERS PERTAINING TO THE DISNEY+ MINI-SERIES "WANDAVISION" YOU HAVE BEEN WARNED!

That's a wrap on "WandaVision." The new mini-series that premiered on Disney+ roughly nine weeks ago. The mini-series revolved around Wanda Maximoff (Elizabeth Olsen) and basically chronicled what she has been up to since all of our favorite Marvel heroes defeated Thanos and brought everyone back to life. After The Battle For Earth (which is what the final battle in "Avengers: Endgame" is referred to, on its Wiki page at least) loved ones who got dusted were reunited, and some of the heroes died. Vision sadly was unable to return due to the sad timing of Thanos' snap. Wanda felt like one of the very few who lost everything and gained nothing in return. She was determined to deal with her grief, so she used her unbelievable power to create her own reality in a sleepy town of Westview.

As I wrote a few weeks ago, and which was hotly debated on social media, the first few episodes definitely threw people off. Why are Wanda and Vision living through old school sitcoms? Who is controlling all of this? Somebody within the universe is watching too? Who is it and why? There was definitely some fun to be had in those first few episodes, and I'm not sure everybody got the joke. But it did all make sense by the end.

If "WandaVision" was about anything, it was about grief. How we can sometimes turn to nostalgia in order to restrain the pain of whatever is making us grieve in the first place. We learn that as Wanda and Pietro were growing up, they had a poor but happy home. She grew up watching DVD's of "The Dick Van Dyke Show" and "Bewitched." That was her family bonding time, and of course she would hold on to those precious memories when trying to cope with the pain of missing Vision and her brother. We can't wear nostalgia as armor though, that will slowly tear us apart, just as it did Wanda on the show. Someone I follow on Twitter called WandaVision "The Good version of 'Ready Player One.''' While that might be funny, when you think about it long enough, it makes perfect sense.

One of the things "WandaVision" definitely benefitted from was the weekly episode release. Something that seems foreign in a binge TV world. That set up worked for the show, rather than against it. Since each ending made the audience guess about next week. Kathryn Hahn is definitely someone from the comic books, but who? WHOA, Evan Peters who played Quicksilver in the Fox "X-Men" movies...is now playing him again now?!? What does this mean! Monica Rambeau? I know that name from somewhere! WHOA, WANDA'S KIDS HAVE SUPERPOWERS! There was always something to talk about each week, which added to the fun.

Overall, and this is the comic book nerd in me talking so take it as you will, but the answers to these questions could sometimes be underwhelming. When they introduced Wanda's children, and the break-neck speed at which they grew in this show, I thought Young Avengers may be on the horizon. But in order to release the people of Westview from her spell and in order to stop Agatha Harkness (more on her in a bit) Wanda had to do away with the reality she created for herself. That means that Vision and her children disappeared. Sadly, if Young Avengers ever happens (which seems not that far-fetched since we have already been introduced to Harley Keener and Cassie Lang in this universe) it'll be without Speed and Wiccan. Too bad. While Evan Peters showing up as a character he played in X-Men, the reason as to why he was Quicksilver here may have disappointed some viewers. Obviously, messing with the multiverse is on the horizon with the MCU, but it doesn't start here. Evan Peters is basically the end of a joke and nothing more.

One of the biggest strengths of this show has been Kathryn Hahn and her fabulous work as Agnes, and the slow introduction of her being Agatha Harkness. Agatha Harkness was an evil magic-user from the comic books who has ran into all sorts of characters in the comic books, Wanda included. In the show, she wants to absorb Wanda's power. Because, yes, while this show did explore all sorts of themes, its a superhero show at the end of the day. Of course there's a Big Bad that Wanda was destined to take care of. Like I said, Hahn was great here, and I am glad that Agatha doesn't die, leaving the door open for her character to return in some form.

I equally enjoyed Teyonah Parris' work as Monica Rambeau. The daughter of Maria Rambeau, whom we met in the "Captain Marvel" movie in 2019. We find out that Monica was one of the many people who got dusted from Thanos' snap, and she re-materializes in hospital, where she was staying due to her mom's health. She comes back to learn that Maria died of her health complications, she volunteers to enter the mysterious force field created by Wanda, agreeing with SWORD, an organization created by her mother. (Apparently since the 90's, even though somehow this is the first we are hearing about it) Monica Rambeau already has powers and I'm sure we will learn more about those powers sometime in the future, because the finale today made it clear that Monica isn't going anywhere soon. I like Teyonah Parris a lot and I look forward to seeing more of her in the future.

Those are all the big comic book characters introduced. The BIG CAMEO that Paul Bettany kept teasing the last few weeks ended up being just smoke and mirrors. The final episode today is a pretty big spectacle and little else. Personally, I am not sure nine episodes were needed, but those missing the big superhero fights were satisfied. Some people like that the final episode wasn't a big cameo fest, while others were expecting someone big to show up. It just goes to show that we have to let go of our expectations with these pieces of entertainment. Sometimes people ruin things for themselves because they are always holding onto rumors or things they hear or read on the internet and they treat it like the Holy Word and we can't do that. Wanda's future is going to be pretty crazy, suggests the final credit scene of this last episode, personally after her journey here, that's all I needed. This was an overall very enjoyable mini-series. Disney proved that Marvel could be cool on their streaming service and now I'm excited for "Falcon and the Winter Soldier" even more.

Posted by Shawn Hoelscher at 6:01 PM