Review: "Godzilla vs Kong" is everything you'd expect! 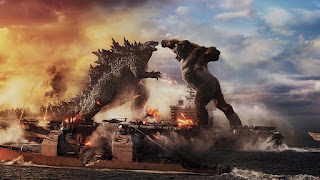 Other than the Marvel Cinematic Universe, I'd wager to say this new "Godzilla Movie Universe" or whatever it s called, has been the second most successful cinematic universe so far. Possibly that "Conjuring" universe may be up there too, but this new line of Godzilla and Kong movies have sizable fanbase and they've all done decently at the box office. "Godzilla vs. Kong" is a bunch of fun, and if this is something you want, absolutely see it. You should know what you're getting yourself into. There is a giant lizard named Godzilla and there is a giant gorilla named King Kong and they are going to throw down.

For the first time in five years, Godzilla is attacking places on Earth, and nobody seems to know why. This prompts the world to begin hunting him again. Meanwhile, a company called Apex Cybernetics recruits some scientists to find out if Hollow Earth exist; which is supposed to be the birth place of all titans. Apex is looking for a power source for mysterious reasons. The scientist recruits Kong, who has been living on Skull Island under surveillance of the company Monarch. Because of Godzilla's sudden temper, and Kong being a helper to find Hollow Earth, this puts Godzilla and Kong on a crash course to fight one another. The thing is, there is always some kind of evil corporation in movies like this, right? Not everything is what it seems to be with Apex, right?

These new Godzilla and Kong movies have had solid human casts so far. Kyle Chandler and Millie Bobby Brown return from "Godzilla: King of the Monsters." They are both incredible actors who do good work reprising their roles here. They joined by new characters played by Alexander Skarsgaard, Rebecca Hall, Brian Tyree Henry, Julian Dennison, and Demian Bichir. All of these actors do what they must and they put enough power in their performances to make the human emotion count.

But the real meat and potatoes of the film isn't the acting, right? You've come to watch two monsters wreak havoc on each other. Let me just tell you, havoc gets wreaked. There are some big Godzilla versus Kong battles in these movies and let me tell you its spectacular. The kaiju carnage is spectacular. The visual effects for these battles is absolutely stunning and if you've loved the action sequences in these movies thus far, get ready for the punches this movie packs. The visuals for Hollow Earth are also amazing. Hollow Earth is a mesmerizing, dangerous place. I can almost guarantee that this will be up for visual effects next year.

Posted by Shawn Hoelscher at 6:02 PM