2020 Was Better Than I Thought: "Another Round" and "Minari" reviewed

The year 2020 was a better year for movies than I originally thought. I am sure some people may disagree with that statement. The theaters were closed, the "big movies" of 2020 were mostly moved to 2021, possibly further. But there were so many great movies that came out. As with how most years work, there are movies that come out at the end of 2020, and don't get a major release until the next year. I have been catching up with lots of these releases as they have been coming out. I can honestly say that I would definitely put "Promising Young Woman," "One Night In Miami" and "Nomadland" on my top 20 of 2020.

I would also put both "Minari" and "Another Round" on that list too.

There aren't too many years when I catch up with things, that my list looks incredibly different, but 2020 is definitely one of those years. 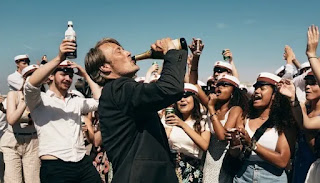 "Another Round" is an import from Denmark, known as "Binge Drinking." It stars Mads Mikkelsen (Le Chieffe from "Casino Royale"), Thomas Bo Larsen, Lars Ranthe, and Magnus Millang. These four actors play four teachers who are don't feel fulfilled by life anymore. Some of them are married, have families, don't have many struggles, but they just aren't feeling alive like they used to. So they hatch a plan together. They are going to plan to until their Blood Alcohol Content is 0.05 a day. They have read a scientific study that drinking to that BAC point each day can improve relaxation and creativity. They are reluctant to begin, but they all give in. Soon enough, they are much more relaxed and happier just drinking to and maintaining that 0.05 BAC each day.
"Another Round" begins as a silly comedy at first. They enjoy this experiment so much that they begin to drink more and more. Its all fun and games though, once the constant drinking leads to trouble at their homes as well as genuine alcoholism. The movie transitions well from a dramatic-comedy to a full on drama. All four actors do incredible work here, and Mads proves why he's really one of the best actors of his generation. While he's done many things here in America, he does lots in his home country of Denmark, and I've learned through the years that his range knows no bounds.
You may hear lots about the film's ending. Believe the hype around the ending. It's a beautiful, soulful ending and yes, easily the best of 2020. A valuable reminder that we get one life to live and its a beautiful, beautiful life. So be sure you feel alive every day. 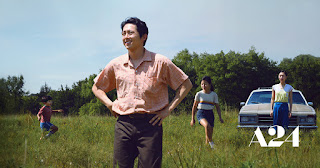 While we are the sum total of choices, we are certainly groomed by circumstances beyond our control. "Minari" takes place in 1983, where a Korean immigrant family, The Yi's, move from California to Arkansas to in hopes of growing Korean produce to sell in Dallas. Jacob Yi, the father, played by Steve Yuen, is optimistic for his family's future. Monica Yi, the mother, played by Han Ye-ri is much less optimistic and they argue quite a bit about their future. Their youngest son David (Alan Kim), has a heart condition and Monica worries a lot about having the funds needed to provide what he needs for medical health.
"Minari" deals with family dynamics, the push and pull of American culture while also never letting go of the traditions and customs from the country you were born in. It's a movie about the decisions our families make have an impact on the lives in which their children become. Jacob is at first, unsuccessful in his farming, simply because its not something he's used to in rural America. Jacob eventually gets help from a local veteran named Paul. Paul is played by my merry surprise by Will Patton. A great character actor we just don't see enough of these days. Who delivers a potent performance here.
I am over-the-moon happy that the world is getting to know Steve Yuen, because he's an incredible actor overall and he does great work here. The Glenn you see on "The Walking Dead" TV show is much different from his comic book counter-part, but Yuen has always done a very good job on the show. He really came into his own with his work in "Burning," which is still one of the best movies from the 2010's. I am glad he is getting the recognition he deserves with his work here. He does tremendous work here in this movie. He bounces off of Han Ye-ri perfectly, who also does good work here. A couple who could fall apart at any moment if the wrong thing happens. Alan Kim and Noel Kate Cho play the family's children, and they are both fine young actors, and do very good here. As does Youn Yuh-jung is the grandmother, who is very crucial in certain moments of the film, and she does it well. This is a family of great performances, all adding to the drama.
Both of these films are worth your time and attention. So seek them out!
Posted by Shawn Hoelscher at 1:40 PM