Who is watching WandaVision? 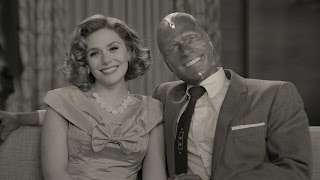 Anybody watching "WandaVision" on Disney+?

It's the new Marvel Cinematic Universe show hat premiered on Disney+ four weeks ago, gracing us with a new episode a week. And while it may not be the "first" MCU show ever, even though we will find out later whether that's debatable or not. The shows on Disney+ will completely tie into the future movies. Featuring Elizabeth Olsen and Paul Bettany as Scarlet Witch and Vision, and also featuring Randall Park as Jimmy Woo; reprising his role from "Ant-Man and The Wasp" as well as Kat Dennings; reprising her role as Darcy Lewis from the "Thor." movies.

If you haven't read any reactions to the first few episodes yet, its pretty confusing at first glance. The first two episodes are basically riffs on shows like "Bewitched" and "I Love Lucy." I am sure there are plenty of Generation Zers who probably saw those episodes and were very confused. That's not meant to be a slap on younger generations either, old school television isn't referenced nearly as much as it used to, so its okay if you read those references above and have no clue what I'm yapping about. Scarlet Witch and Vision are pretty much spending their time in a always revolving sitcom. There seems to be somebody watching though and people have been a fun time trying to figure it out.

Whoa...whoa! I've read some people say. Where are all the superpowers? Why isn't there a villain Scarlet Witch is fighting? There are some out there who have been expecting the typical Marvel adventure. It's okay if you don't care for "WandaVision," but remember that for the last decade, Marvel made a multi-billion dollar brand using mainly C and D list heroes. At this new stage in the game, Marvel has bought, literally bought, themselves the clout and the right to experiment if they choose to. I like that Kevin Feige is choosing to test his audience, to show us that these characters can do more that the ordinary, and that there is much more to superheroes then who they choose to fight. Its also a little amazing to me that people were giving Marvel grief for making "the same stuff" over and over, now they are really trying something new and they are getting heat for that now too.

A character that Scarlet Witch (who goes by Wanda only on this show) comes into contact with Geraldine, who is played by Teyonah Parris. At first Geraldine is a friend. But how she is reacts to Wanda and the things she says to him begin to confuse Wanda. There are many strange things that seem off about Wanda's surroundings. She can't seem to figure it out.

Every episode features a brand new puzzle piece. There is definitely a mystery as to what is going on with Wanda and she seems to become more and more unhinged each episode. I am not here to give everything away so far. I'll write more about this show as it continues to unfold. But so far its exciting, so far its fun, and so far its intriguing enough to keep me guessing, still featuring the humor and inspiration of the Marvel movies, just in a different way. Comic book fans will love the references and love figuring out the callbacks to story arcs such as "House of M," or "Avengers Disassembled" or "Avengers: Standoff!" and the run of Vision comics by Tom King. There are several great performances by actors like Kathryn Hahn and Fred Melamed.

This is something that will keep you guessing, its not structured like other MCU stuff, but that doesn't mean that it isn't worthwhile. I hope you keep tuning in, because I sure will. I used to write about many of MCU's shows, and I will happily sit back and write down my thoughts on this one. Marvel continues to keep their audience they worked so hard to build on the hook and after a particularly tough hiatus, its nice to have them all back!

Posted by Shawn Hoelscher at 7:21 PM