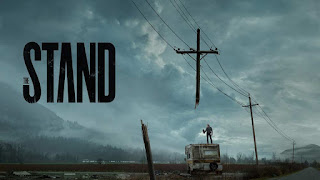 I've never been shy about my Stephen King love on this blog. So I bet you thought I was excited for "The Stand" coming to CBS All Access this past December. You'd be absolutely right. I couldn't wait to see this mini-series play out. Especially since the cast looked spectacular on paper.

For anybody who hasn't read Stephen King's epic book, "The Stand" is essentially about the end of the world. A bio-terrorist weapon is accidentally unleashed on the American public, a weapon so powerful that it has a 97% kill rate. It is a weapon of many names; A6, Captain Trips and most popularly Superflu. The government's failure to contain the virus leads to millions of deaths, and soon the Superflu pandemic reaches global proportions. The few survivors left in America are drawn towards one of two opposing forces, either through dreams or visions. One is Abigail Freemantle, also known as Mother Abigail, an elderly Christian. The other is Randall Flagg, a name hardcore King fans should recognize, a man who very well could be The Devil and is pretty much the ultimate embodiment of evil. As Abigail draws the good-hearted, moral survivors; Flagg influences the outcasts, the easily manipulated and the immoral survivors. Which leads to a confrontation between both groups for survival. It boils down to essentially being King's version of "The Lord of the Rings." As four members of Mother Abigail's group (representing four hobbits, a fellowship) to confront Randall Flagg (a dark lord) at a sanctuary he's made in Las Vegas (because which other city would be a better stand in for Mordor?)

There was an adaptation of "The Stand" made in 1994. While it was made-for-TV and it's very, very 90's, it still holds up okay. It adapted most of the big events from the novel (which I should mention was over 1,100 pages). It starred great actors like Gary Sinise, Molly Ringwald, Ed Harris, Ruby Dee, Miguel Ferrer and Ed Harris. It may be a bit dated and the special effects used in it might look a little silly, it's still a perfectly okay adaptation.

I tell you all of this up front. Because if you've never read the book and if you've never seen the 90's mini-series, then the new 2020 adaptation will probably make little to no sense.

Stephen King's book is a pretty straightforward read. So it puzzles me that one would read this epic book and tell themselves "You know what would make this cool? If we told the story in non-linear fashion!" But that's exactly what creator Josh Boone and showrunner Ben Cavell decided to do. They have told King's epic in non-linear fashion, jumping all over the book for no particular reason other than to purposely confuse the audience. That's only for the first three episodes though. Then it decides to start telling the story in regular fashion. It's like the creators watched "Lost," were big fans of that show and decided to copy it for a little while before realizing it didn't make any sense.

Because of this choice in storytelling, there is no character development for anybody. The two main leads spark a romance and it's never earned. Randall Flagg, the big bad of the story, never comes off scary, intimidating, or a force to be feared. There are bodies crucified all along the Las Vegas strip, we see Flagg brutally murder a man who didn't listen to him. Still, Flagg comes off as a goofy, post-Quentin Tarantino villain. This kills me because Alexander Skarsgaard was hired to play him and I know for a fact that you give Skarsgaard good scripts, he'll get you something out of it.

In fact, one of the reasons I was so excited for this adaptation was the cast. When you read the cast on paper, you would think you'd be in for a good adaptation. You got James Marsden as Stewart Redman, the main hero of the story. You got Whoopi Goldberg as Mother Abigail. You got Greg Kinnear as Glen Bateman, a guy who becomes very close to Stewart. You got Nat Wolff as Lloyd Henreid, a criminal who becomes Flagg's right-hand man. You got Ezra Miller as The Trashcan Man, a schizophrenic who becomes obsessed with doing Flagg's bidding. You've got JK Simmons, Bryan Cranston, Hamish Linklater and Daniel Sunjata making glorified cameos. These are lots of good actors right here, lots of other actors, like Odessa Young, Fiona Dourif, Eion Bailey, Owen Teague, and Katherine McNamara who I also dig in roles. And actors that I did come to respect from being in this. Like Jovan Adepo and Brad William Henke. King's "The Stand" is a sprawling epic, rich with some of the best characters he's ever written. So you need reliable actors to bring these characters to life. These actors are good and if anybody else on the planet wrote this mini-series, I bet they'd kill it. But each and every actor in this entire mini-series is wasted, working with bad scripts and given zero character development. The show constantly feels like its on fast forward, its never given a chance to breathe. Events shake out and we feel nothing for the characters or their circumstances.

I also understand that in a world where books are adapted multiple times, you have to put your personal stamp on it. That means taking some liberties. But none of those creative liberties work in this adaptation. Lloyd Henreid in particular is a guy who is fine being Flagg's right-hand man, but slowly begins to realize that he's in over his head and that maybe he made a bad choice following Flagg. Wolff plays Lloyd like he's The Joker without any make-up on. A deranged, manic individual. When it comes to the part where he should begin to feel guilty over joining Flagg, it never feels earned. When you read "The Stand," you learn that Flagg keeps a very stern, very authoritarian hand over his followers. Which is why Vegas gets cleaned up and running much faster than the sanctuary our heroes create. There are certain behaviors that Flagg forbids, which gives him his power. Flagg's New Vegas in this adaptation is so overblown that's its honestly almost funny, furnished with gladiatorial death-matches and threesomes happening out in the open.

Stephen King has returned to add upon "The Stand" more times than George Lucas returned to his original "Star Wars" trilogy. "The Stand" was originally written in 1978, then King released a "Complete and Uncut" edition in 1990. That's the version I read in grade school and basically the only version sold in stores as far as I can tell. One thing about this new adaptation was that King wrote a new coda. The last episode of this mini-series is entirely new material King wrote recently. To understand my frustrations, I will have to dive into spoilers. So if you have any desire to watch this or if you plan to read the book, you might want to bail.

So the coda begins after the nuclear destruction of Las Vegas. Flagg and all of his followers are killed after The Hand of God moment. Frannie Goldsmith (Odessa Young) gives birth to her baby, who begins showing symptoms of Superflu, but quickly overcomes it. Stu, the only survivor of the foursome who came to confront Flagg returns and meets his baby. Stu and Frannie decided to move back to Frannie's homestate of Maine. Even though they have a perfect community there that has power and doctors and the whole bit. But they for some reason decide to go to Maine anyway, away from essentials and into uncertainly with a new baby. They stop at a house to camp for one evening and while Frannie tries to get water out of a well, she falls in. In a dream, she is confronted by Flagg, resists his temptations then is congradulated by Mother Abigail. Stu was away gathering supplies during all of this, and when he returns, he sees a little girl he's never seen before holding his baby and who helps him get Frannie out of the well. She also magically cures all of Frannie's injuries. And that's pretty much it. While there is some religious symbolism and lip service to how violence never ends in this world, this coda is sadly meaningless. One thing I will praise is when Stu and Frannie originally come on the house, there is some tension in the scene that is sadly missing from the rest of the mini-series. I don't know how you adapt a Stephen King novel and not make it scary or intense, but this mini-series managed just that. Just like everything else in this mini-series, the stakes and meaning behind the scenes are never earned. Even in this coda.

I read Stephen King's "The Stand" in grade school. The 90's mini-series used to play at least once a year on The Sci/Fi channel, and I watched it alot growing up. I also had a really cool English teacher in grade school who allowed me to do a book report on "The Stand." I feel like I know the story pretty well. They hired some great actors for this new adaptation and they give it their all for sure. Greg Kinnear and Brian William Henke in particular stick out here. But because of the way Boone and Cavell chose to tell this story, the audience will get nothing from this. There are no stakes. There is no character development (something that is particularly shocking, since this new version is three hours longer than the 90's version), nothing has any sort of emotional weight to it. This adaptation is a sad, confounding mess.

Posted by Shawn Hoelscher at 5:22 PM