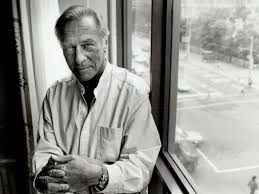 This week, it has sadly been announced that we lost Christopher Plummer and Hal Holbrook. These two men were legendary actors who had lengthy, popular careers in movies that spanned many decades. Christopher Plummer died at age 91, and Hal Holbrook; who died on January 23rd but whose death wasn't announced until this week, was 95. These men had nice long lives, full of memorable performances.

The career of Christopher Plummer is so massive, I could type all day long about his career. Instead, I am going to give you ten films that feature great performances by Plummer and I hope you seek them all out. There was so much more to his career than "The Sound of Music."

Now, I know. I am a horrible, horrible Millennial. I don't have much variety as far as years go for Plummers career. But going through my favorite performances by Plummer has also made me want to dissect the rest of his career, and I can hardly wait to get started.

Hal Holbrook also served our country during World War II. He held the rank of Staff Sargent in the United States Army. Thank you, Hal, for your service.

If each of these ten films aren't enough for you, these men had many other movies, TV appearances and stage plays to their credits. There is so much to find if you go looking and I encourage you do. These two titans will be missed.

Posted by Shawn Hoelscher at 6:52 PM