I've been a little late bringing you this list.

As the movie studios were hustling trying to figure out how they were going to release their movies, and trying to decide which movies would get moved to next year, TV productions (some of them, at least) were stalled, and some shows got pushed to later in the year due to COVID. Since many people were in, you had a steady stream of content to watch and there was still plenty of new (returning and "new"
new shows) to watch while everyone was hunkered down in their homes waiting COVID-19 out. There was actually a tremendous surge of new shows. I could have easily made an entire 20 list of new shows. But some of my favorite shows delivered as well, and some even ended their entire runs with all barrels blazing (something that is hard to come by in the TV world). The 2010's definitely changed TV in a big way, TV has never been treated as seriously as it has been ever before (You can argue that this actually started in the late 2000's) and we'll have to hope that the streak continues for the unforeseeable future. As I said though, LOTS of great potential in 2020, so I think this era of great TV isn't slowing down for anything. 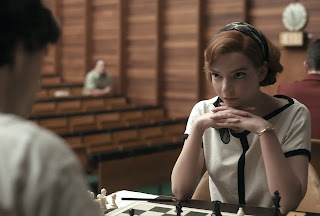 All the hype you've heard about this one is real. "The Queen's Gambit" is fast-paced, engaging entertainment. For someone who never got into chess and never understood the fascination of it, this is a miniseries that kept me on the edge of my seat. Anya Taylor-Joy is quickly becoming one of my very favorite actresses, and she delivers here. Her Beth Harmon was one of the most unique TV heroes of the year and her journey through this miniseries was a delight. 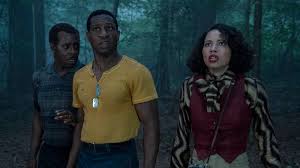 2. Lovecraft Country (HBO)
The African American journey through the history of our nation is a horror movie. Easily the coolest and strangest show to hit the small screen this year was this wicked little gem. Based upon a novel by Matt Ruff, the series follows Jonathon Majors' Atticus as he travels across 1950's segregated America in search of his missing father. On his journey, he comes across a mysterious town and finds out his lineage is full of secrets, the dark kind. I don't know what Ruff saw in H.P. Lovecraft's writings that he could use to tell metaphors about how we've treated African Americans in this country, but the show is delightfully haunting and crazy weird in the best possible way. I can't wait for more. 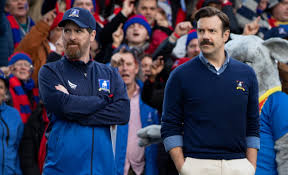 3. Ted Lasso (AppleTV+)
The world needed Ted Lasso in 2020.
"Ted Lasso" tells the story of the title character played by Jason Sudeikis. A college football coach who takes a job as head coach an English Premiere League team. He moves to England to coach, the townfolk don't really believe in him, he has no experience coaching soccer, and the league itself needed to fill the spot out of desperation, and view Lasso as disposable. Lasso represents the best possible type of American, someone we all should strive to be. Nothing ever stresses him out, he sees the good in every person, in every situation. He tries to make everyone around him as comfortable as possible, and not in a creepy way but in a sincere way. He's basically Steve Rogers without the super soldier serum and who is much more passive. He's able to get to the heart of everyone around him simply by being his thoughtful, aw-shucks self. It's a reminder of what America can be when its at its best, and this is a show every American owes themselves to watch. 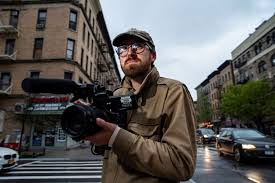 4. How To With John Wilson (HBO)
One show that I desperately fell in love with in the 2010's was "Nathan For You." I know based upon the type of humor that show featured, it wasn't for everyone. I'm not sure awkward humor is something that appeals to the masses, but it certainly worked for me. Nathan Fielder returned as producer on the #4 show on this list. "How To With John Wilson" was exactly how it sounds. A documentarian focuses on a different subject each episode, and teaches you how to do things. From proper scaffolding to cooking risotto, each topic is pretty random but ties into Wilson's hometown of New York City in goofy ways. It has that awkward humor you remember from "Nathan For You," but its not nearly as cringey as the humor from that show. I hope we get a second season of this. 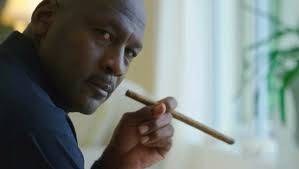 5. The Last Dance (ESPN/Netflix)
I must be a pretty hardcore Millennial for including this but I remember just how remarkable it was to watch the Chicago Bulls during the Michael Jordan era. When Phil Jackson was coaching and Jordan had Pippen and Rodman in his corner. It didn't seem like basketball, it seemed like performance art. Watching Jordan, Rodman, Pippen, Jackson, and even Steve Kerr, Horace Grant, Toni Kukoc and others reflect on the 1990's Bulls getting their dynasty was a delight and it was one of those cool time machine moments that felt better than it really had any business being. (It has also been source of some pretty funny memes) Also, a nice send-off to Kobe Bryant was very nice as well. 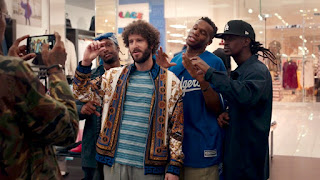 6. Dave (FX)
If awkward humor isn't your cup of tea, perhaps you may like some oddball, dramedy style instead? "Dave" tells a fictional story (which could be self-autobiographical) about a fictional version of the rapper Lil Dicky. Lil Dicky is convinced he's to be one of the greatest rappers of all time, and this first season represents the first steps in that odyssey. FX may be adopting a certain type and style of television show at this point, but its hard to argue against the catalog they're building. I can't wait to see much more of "Dave." 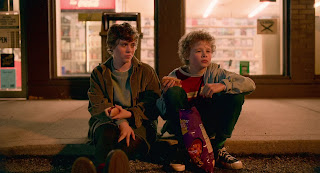 7. I'm Not Okay With This (Neflix)
Shame on Netflix. Seriously, shame on Netflix. I am sincerely sorry if this show didn't reach its audience. Or that maybe they didn't see the value in continuing this particular story. But I am sincerely going to miss "I'm Not Okay With This" after one season. This is was a crazy mixture of a John Hughes teen comedy mixed with a comic book superhero story, but with a 21st Century touch. It was smart, it was funny, it was heartfelt. And I am going to be forever butthurt we didn't get more of this story. Maybe if everybody starts tuning in now we can shame Netflix into a revival! 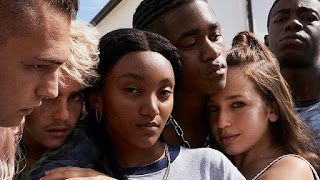 8. We Are Who We Are (HBO)
A common theme in this latter half of the list could be described as child actors who all starred in "IT" together come of age. Sophie Lillis and Wyett Olef both starred in "I'm Not Okay With This" and Jack Dylan Grazer absolutely electrifies in "We Are Who We Are." Grazer as Fraser. A boy whose mother is in the military and they move to a military base town in Italy in 2016. If you ever forgot what its like being a teenager, this show immerses you in the wild roller-coaster that is being a teenager. It's about friendship, first love, and most of all, figuring out who you are. Told in such a delicate, elegant fashion that feels like great storytelling. Oh, and all the "IT" kids are going to be famous for many years to come. Yep. 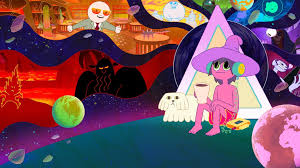 9. The Midnight Gospel (Netflix)
Pendleton Ward first hit my radar with "Adventure Time" and I've liked all the "Distant Lands" specials on HBOMax so far. Ward shifts gears quite a bit with "The Midnight Gospel" which he created with comedian Duncan Trussell. It's a unique adult animated show where actual recorded interviews from Trussell's podcasts are set to some very wild animated adventures. The show is set in the dimension called the Chromatic Ribbon and Trussell plays Clancy Gilroy who owns an "unlicensed multiverse" and travels to different world within said multiverse to interview people for his spacecast. It's silly and strange and wild and it's just what I needed for a crazy year. I hope this isn't our only visit to the Chromatic Ribbon. 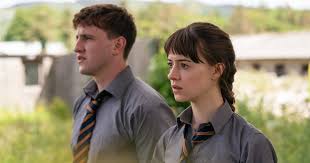 10. Normal People (Hulu)
Sometimes, love is complicated. Sometimes, it may even be forbidden. No matter what though, all of our decisions create consequences and those consequences can either be good or bad. This Irish romance debuted on BBC One in April and eventually made onto Hulu. It follows the lives of Marianne and Connell. Connell is a popular boy in school and Marianne is an outsider, and they secretly meet with each other for romantic time. They eventually begin to really fall for each other, but due to high school politics, nobody can know they are together. Connell's friends make fun of Marianne, mostly in front of Connell, which eventually strains their relationship, not just after high school but further on in their lives. The smallest actions can affect your entire future, and that came brutally clear in this riveting drama.
HONORABLE MENTIONS:
(Again, it was a year full of great NEW TV, and if 2020 was any indicator, we are in for a great decade of TV. Also check out the following)
HBO's "The Flight Attendant," Netflix's "Sweet Home," HBO's "I May Destroy You," FX's "A Teacher," AppleTV+'s "Central Park," HBO's "Raised By Wolves," Hulu's "Little Fires Everywhere," Netflix's "#blackAF," FOX's "LEGO Masters"
The Ten Best Returning Shows
Here is a list of the best shows that had a previous season.
1. Bojack Horseman (Netflix)
The saddest entertainment moment of 2020 was saying goodbye to BoJack for the last time.
2. The Mandalorian (Disney+)
That finale though. All the feels.
3. Better Things (FX)
I continue to enjoy the upside down life of Sam Fox
4. The Good Place (NBC)
Okay, it was really sad saying goodbye to the Good Place for the last time.
5. Harley Quinn (DCUniverse)
If there is any show that needs about ten spin-offs, its Harley Quinn. I want to spend as much time as possible in this warped DC Universe.
6. Modern Family (ABC)
Okay, Okay. saying goodbye to BoJack and the Good Place was hard. But man, so was saying goodbye to the Pritchett's and the Dunphy's for the last time. Sheesh.
7. After Life (Netflix)
Losing a loved one is devastating and Ricky Gervase is an English treasure.
8. Rick and Morty (Adult Swim)
Any year when Rick Sanchez gives a random alien a gift box featuring an anus-hole that farts out a middle finger, is a good year indeed.
9. Superstore (NBC)
The COVID-19 jokes were good in this show.
10. Fargo (FX)
I don't know if I liked season four as much as the previous seasons, but it's still a ton of fun. It also features the best work Chris Rock has done so far.
That's it for me. My Top Films and TV lists are published. I can put a stick in 2020 now. It's done. Time to engage completely in the entertainment of 2021! Thanks for reading.
Posted by Shawn Hoelscher at 6:29 PM