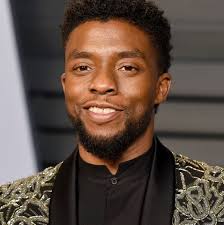 It feels pretty unbelievable and I can't believe I'm typing this, but Chadwick Boseman passed away over the weekend. He was only 43, but he has already had an amazing career. After showing up in some television series' over the years, he starred in such things as "42" and "Get On Up." In those two movies, he played icons Jackie Robinson and James Brown respectively. It seemed like Boseman was making a career off of playing black icons. Robinson. Brown. Black Panther. Thurgood Marshall. Thoth. He had a knack for bring important black figures to life, he had success with it.

This feels like a Heath Ledger moment again, 43-years-old is really not that old. Not at all. He was beginning to rise in the A-List and now we are never going to know what his career would have looked like. He was building quite the resume and it would have been nice to see where his career would have lead him. He was clearly up to the task. He was diagnosed with colon cancer sometime in 2016, so the idea that he made a handful of movies while he was fighting cancer only speaks to the strength and courage he had as a performer. I can't believe it, he was a god among men.

I was lucky enough to hear him speak personally. His film "Marshall" opened the Chicago International Film Festival in 2017, the first film festival I ever attended. I didn't get to meet him. I wanted to shake his hand after the Q & A, but he, Josh Gad and Sterling K. Brown moved pretty fast out of an auditorium that was already packed. But it's okay, having the pleasure to hear him speak personally was the coolest experience in the whole festival.

Thanks for the memories, Chadwick. You were great and you will be missed.

Posted by Shawn Hoelscher at 10:46 AM