What to expect from my Top 1000 Favorite Films List 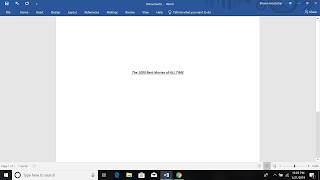 On January 21st 2019, I posted the above image to my social media platforms.

Later on in 2019, I turned 30. I felt as if the 2010's was a decade which felt like I was leaving the young man I felt I had been for awhile behind and stepping into the shoes of someone a bit more mature. I was already a father by then, and another child would be entering my family in 2020. I remember turning 30 seemed like such a milestone age, and I was trying to figure out who I really was as a film fan, and how I could do something special for my blog.

Knowing how passionate I am about film, the question I get the most is "Shawn, what's your favorite movie?" Seems like a fair, simple question, right? Honestly, its the toughest question people ask me about film. Simply put, I am not a guy who just watches whatever new gets released each weekend and that's it. Sure, I love the new and that's certainly part of the cinematic diet, but I am constantly strengthening my film knowledge and language with a wide-range of vintage film each year. I usually see somewhere in the ballpark of 150-170 new releases every year, I have no idea what that number would be if I included films from other years I am seeing for the first time. You may also notice that when I discuss great film, I hate limiting myself. At the end of each year on this blog, its common to see a top ten. But you also get a Runner Up's list and sometimes another list of movies I didn't have room on either of those lists or I'll make a specialty list or I'll just throw the traditions out the window and post a top 20 or top 25. If my shelves at home have room for all the movies I love, why can't the lists I make.

I'm 31 years old now, and I want to take inventory on what I've seen so far. I also want to stop beating around the bush or talking around what my favorite films are. Sure, I maybe have come up with a "Favorite Films" list a time or two on this very blog. I always immediately regretted it though. I barely put any thought into those lists and they changed in my mind instantly. The world would make you think that the cinema is a small, but its anything but. The world of film is a vast ocean, so that can make it difficult to come up with a list of favorite films that's worth a darn. How does one qualify? How do you rank such a list? My greatest fear when making a Favorite Films OF ALL TIME list is that I may accidentally leave off something major. Even though its all opinion and those are different for everyone, I may personally feel bad for leaving it off.

All of these ideas were churning in my head on that day back in January of 2019. In an effort to confront the film fan I am after 30 years. In an effort to really deliver an effective, worth-while Favorite Films of All Time List that really explores the history and classics each era and genre while including as many "classic" films as I possibly could, I realized I had to go big or go home.

So a week from today, you'll be getting my Top 1000 Favorite Films of All Time list. The most ambitious thing I have ever put together. Anywhere. Ever.

Here's a couple things to think about before you read the list next week.

1. The List will be in Chronological Order. I have a dirty little secret for you. I hate ranking movies for lists. Sure, its been a tradition for film critics for ages and while I always took it seriously on my own website, I can't honestly say I really liked it. When I love a movie, I love it. That's it. I don't try to figure out where something ranks in the greater pantheons of other movies or even the genre. I just love something. I become addicted to the films I love, no matter the subject matter. With that said, taking 1000 movies and trying to rank them in any fashion seemed next to impossible. How would YOU personally rank a silent era film to a 80's slapstick comedy to a Korean horror film to a 21st Century superhero flick? Yeah, suddenly it sounds like quite the choir huh? Looking at the list chronologically, you'll understand that I have a deep passion for the films themselves, instead of trying to work through what is better. Plus, I think you'll enjoy looking through the great history of film and see just how each decade of film differed from the last.

2. As always, this is just me. I hope you read the list for fun. I hope you use it as a point of reference. I hope its a piece of amusement for you. As always, I am not trying to declare in any serious manner what THE BEST films of all time are. Simply put, despite seeing many films. I HAVE NOT seen every movie made so far. I never, ever will if I am being blunt with you. Get this though, you never will either. So how can one REALLY declare a best of all time if they haven't seen every film known to man? This is just me putting my first 31 years of film fandom into context and perspective. If you don't spot a movie on the list that you love dearly, don't fret. It's possible I haven't seen it. It's possible I like it too, I just didn't feel it belonged in front of 1000 other great movies. Or I may NOT like it. That's okay too. We don't have to see eye to eye. Something I've noticed too about movies is that they are time bombs. I know from experience that I may have just liked a movie when I initially saw it, but maybe loved it a few years later. Maybe I hated something I saw the first time, but ended up loving it the next time, and vice versa. That's not living a lie. Art hits us in different ways. Art is constantly changing. There are plenty of movies that will show up on the list next week that were unpopular upon release, but word-of-mouth over the years turned them into classics. How art hits people and when is something that is nearly incomprehensible, and its one of the joys of movies.

When a person makes a list of favorite films or favorite albums or favorite TV shows or favorite books or even favorite restaurants...it truly is a political act. You are showing the world what art holds more value to you. I think that's why people are so fast to get worked up on the internet when critics, big and small, publish lists like these. There is always this feeling that the writers we read should feel the exact same way about the movies we love. But that's not true, because art hits everyone a different way. I hope we can all keep that in mind when you read my list next week.

Think of it this way. If I was teaching a class on cinema, this list would be your syllabus. If I had my own movie channel on TV, the titles on the list next week would be the films I would first try to get licencing rights to. If you were to ask me what the 1000 movies I think you should see before you die are, tune in next week.

This list took me over a year to put together because it was scrutinized upon, around the clock. There were titles on it that I originally had but took off. There were movies I watched in preparation for the list that never got on the list. There was plenty of re-watching of old favorites and plenty of tracking things I haven't seen that I felt might make the list if possible. It was a lot of fun work, but also a tremendous task. After moving and shuffling and shifting titles around, I finally reached a place where I told myself. "Shawn, this is the right version. Publish this list." So, I am and I hope you join me next week to find out what made the list. I'd love to hear how many you've seen.

Couldn't have said it better myself, Keanu.

Couldn't have said it better myself.
Posted by Shawn Hoelscher at 8:14 PM