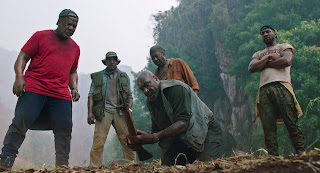 We are almost halfway through the year, and I have finally discovered my top two of the year so far. I can't believe I found them in the course of roughly three days. This usually doesn't happen and even as the world is falling apart, it still seems there are stories being told that fill me with hope.

My favorite two movies of 2020 so far are "Da 5 Bloods" and "The King of Staten Island." It's not even close. Maybe it would have been close if COVID-19 didn't happen, and we would be getting even more movies right now and we wouldn't have to be jumping through hoops to see new movies. BUT that's the hand we've been dealt this year. For right now, "Da 5 Bloods" and "The King of Staten Island" are the two best movies of the year so far. Ironically, they are two movies that would fit nicely as a double feature.

"Da 5 Bloods" and "The King of Staten Island" are both about men affected by their pasts in a big way. In "Da 5 Bloods," a group of soldiers who served in Vietnam together hid some found treasure during their tour in the war. They go back many years later to retrieve the treasure they hid, and the memories of their time there begins to bleed out. In "The King of Staten Island," we meet a free loading loser who is going nowhere in life because he's crippled by the memory of losing his father, who died doing his job as a firefighter. They are both movies that remind us how we truly are the lump-sum of our experience and how life bounces off of us really shapes us into the people we become.

"Da 5 Bloods" couldn't have come at a better time, with all the social upheaval going on in our country right now (justifiably so). That's Spike Lee for you, he thinks long and hard about the African American experience in this country. But just because he shines light on some hard truths doesn't mean he isn't a patriot. He's been fighting for social changes in this country longer than we probably know. He's an artist that firmly believes that art can change the world, and that's one of the many reasons I keep going back to movies. That finally we'll all see enough movies or the right movies and we'll finally figure out who we are supposed to be in this world. The opening of "Da 5 Bloods" begins with news footage of how Dr. Martin Luther King Jr. repeatedly denounced our involvement in the Vietnam War, and shed history on how African Americans constantly defended the freedoms this country guarantees but barely saw any of those actually freedoms coming home.

"Da 5 Bloods" has an incredible cast; including Delroy Lindo as Paul. Delroy Lindo gives the performance of his career, playing a man so tainted by the history of blacks in America, that it turned him into a Trump supporter. Don't get it wrong, Lee is no fan of Trump, but the movie deals with how so much anger can blind us from our well-being at times. It also co-stars Clark Peters as Otis, Norm Lewis as Eddie and Isaiah Whitlock Jr. as Melvin. These were the men who hid Vietnamese treasure along with their commanding officer Storming Norm, given life by the great Chadwick Boseman. They thought, since MLK was assassinated during their tenure, they go off-mission, take some treasure, and do something worthwhile with the money. Something that will help the country better. The work done by Peters, Lewis, Whitlock and Boseman is all incredible, but this really is Delroy Lindo's show, and you might be hearing his name award season time.

Another name I won't be surprised to hear around award time? Pete Davidson. A part of me can't believe I just typed that. I haven't always thought much of Davidson and never found him overly-funny, but he comes alive in a way here that I've barely seen before. Not bad for being the type of character he's comfortable playing. Davidson plays Scott, a slacker who can't keep to his dream. He's 24-years-old and he still lives with his Mom (Marisa Tomei), which looks worse now that his kid sister (Maude Apatow) is headed to college. He's got this idea of having a tattoo parlor and restaurant hybrid, but has made no moves whatsoever to get there. He spends most of his time getting high and doing stupid shit, like practicing tattoos on ten-year-olds.

This leads his mother to meet Ray, also a firefighter played by Bill Burr. Ray and Scott's Mom begin to date, and Ray slowly makes his way into Scott's life. Scott hates the idea of his mom dating someone who had the same occupation as their deceased father. But eventually, his guard goes down and he actually comes to respect Ray. I don't want this movie to sound like some kind of Hallmark movie. It's not. It doesn't have the cheerful cliche Hollywood ending, but its also not an unhappy ending either. It's just an ending made by a realist.

Judd Apatow made this, and it may remind you of "Funny People" in a lot of ways. But I have to say that "Funny People" was a good idea buried in a boring movie. There's plenty of humor in "The King of Staten Island," but it's mostly a drama about how hard it is to shed the trauma of our lives. It's got much better pacing compared to "Funny People" as "The King of Staten Island" is nearly two hours and twenty minutes long, never once feeling that long in any way. There are plenty of great small roles sprinkled throughout the movie. I think Scott's girlfriend Kelsey, played by Bel Powley, is probably my favorite. That one person who sees the best in you despite being an absolute trainwreck are rare in this world, and Powley brings that to life with aplomb. 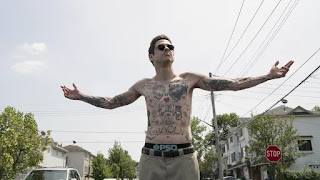 As films slowly begin to churn out and as the theaters slowly begin to open again, know that both of these movies are worth a look. They compliment the times of our country right now and they both also work as pieces of entertainment, marrying humor and heartbreak in equal measure in the best possible ways. Two movies so great never come out so close together, a minor miracle as the world continues to turn upside down in this year we call 2020.
Posted by Shawn Hoelscher at 9:07 PM