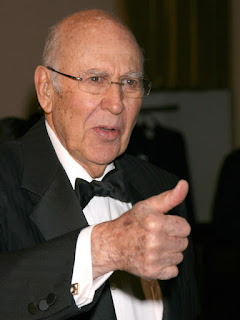 I remember December 2001 quite vividly. Back then, you could sell a movie on great actors instead of nostalgia and brands. Funny enough, the movie that comes to mind when remembering that month and year was actually a remake. "Ocean's Eleven" from 2001 was at the top of my must-see list. It looked like a fun caper. With George Clooney, Brad Pitt, Matt Damon, Julia Roberts, Don Cheadle, Bernie Mac, Scott Caan; I was already on board. I went the first weekend it opened. My expectations were met with flying colors, but the actor that stood out most to me wasn't any of the actors I listed above. Even though, I did enjoy each and every one of them during the movie. No, the actor who really made an impression on me was Carl Reiner. This is really going to show how much of a Millennial I am, but this was my first encounter with Reiner.

Carl Reiner's early work included such television shows as "Caesar's Hour," "Your Show of Shows" and "The Dick Van Dyke Show." He appeared in many movies, such as "It's a Mad, Mad, Mad World."

He also directed movies such as "Where's Poppa," "The Jerk" "Oh, God!" and "All of Me." He has a famous son named Rob Reiner, who has been an accomplished director for decades.

Carl Reiner was a comedic legend, may he rest in peace, and my greatest condolences to his family.


Posted by Shawn Hoelscher at 6:37 PM