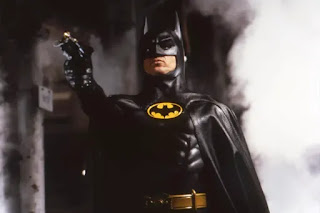 There's no denying the fact that Michael Keaton is the World Heavyweight Champion of actors who have played Batman. Still to this day, Keaton is the most beloved man to take up the cape and cowl. Something that I feel I can't argue against. So of course, in this time of nostalgia and branding, Michael Keaton will be returning as Batman.

He will play the character again in the upcoming "Flash" movie, which will see Ezra Miller return as the title character and which will be set in the DC Extended Universe, sharing continuity with the films with Gal Gadot and Henry Cavill. They will be exploring the Flashpoint storyline, which involved the flash running so fast that he changed something in his past, which only had repercussions for not just his reality, but for multiple realities across the multiverse. If you don't follow the Arrowverse shows on The CW, DC comics has a knack for telling stories in which our favorite heroes mess with the multiverse. The multiverse being a concept where there are multiple earths across millions of realities. Which is why Michael Keaton's Batman can participate in the story.

While Michael Keaton returning as Batman represents something big in nostalgic popular culture, it throws up some red flags for me. The single biggest problem with DC movies thus far is how quickly they feel the need to jump the gun with their cinematic characters and stories. No other studio in the business seems to be reacting to other studios' success on the level DC and Warner Bros. does. DC comics is full of great characters, no doubt. But Warner Bros. seems determined to drop the ball each and every time out. Just look at the history of the studio with the characters for proof. There's a reason why Marvel got to where they are today, they took their time. I can tell it drives comic book fans mad having to sit through origin story after origin story on the big screen. The thing those fans have to remember is Hollywood is trying to make movies that appeal to both the comic fans and the general public. Because Marvel didn't make movies for a niche audience, because they showed the world how the characters are different and how they are alike, people have fallen in love with the Marvel world and their brand.

DC is always ready to just shoot from the hip with their concepts, and they just kinda pretend you know everything you need to know going in, which is why audiences and critics have been mostly left cold. The Flashpoint story is certainly cool, but I would much prefer Ezra Miller getting a solo Flash movie, away from the greater DC universe and the multiverse, in order to really get to know him as a character. Plus, it would be nice where we get a Flash-centric movie that doesn't feature characters already sucking all the air out of the room. Miller's Flash has cameo ed in "Batman vs. Superman," was apart of "Justice League" and will now get a solo movie that isn't totally his. Your mileage may vary, and that's okay, it just seems very problematic for my tastes.

The CW shows work better with their crossovers simply because we've spent so much time with the characters and we've taken the time with the development. If you want to get an audience involved with your character, you need to take that time. You need to make that development. You need your whole audience to care. If you do those things, the money and longevity in the franchise will be able to last in a meaningful way.

In late December, I published my 100 Favorite Films of the 2010's and one thing I talked about in that piece is how disappointed I was overall that the 2010's will mostly be defined as the decade of the fan. We got a decade full of nostalgia brought to life, but when you think about it, how many of those movies were really worthwhile? I don't mean to sound like a snob, because there were certainly some big franchise fair that made my top 100, but it was mostly smaller, character-driven original films. During this COVID quarantine, I've been pretty immersed in old Hollywood, before movies based on random pop culture really became a thing. A time when great actors sold a story, not "GUESS WHICH FRANCHISE/CHARACTER/WHATEVER WE ARE ADAPTING" and there was something wonderful about those movies on their own. I'd love to get back to a time where we told great stories, not just copied the past. Not just went after easy money by turning something random into a franchise. But as Hollywood reboots "Twister" for no reason, as Universal tries to fit their old Monsters into modern movies and as WB makes a sequel to "Space Jam" featuring seemingly every pop culture character they have rights to, it doesn't seem like that non-stop franchise mindset is going away any time soon.

Hollywood seems to think right now that if they adapt the right things, if they tap into the right nostalgia, or if they bring back the right passed treasures that people will automatically love it. Maybe they are right. I do see many people flipping for these movies, and it does seem that just merely seeing their favorite character come to life is enough to call a movie a timeless classic. Not for me. I need character and theme above all else. I need to character about the story being told. You maybe wired differently and that's perfectly fine. I just can't be won over simply because an actor I love is playing a character he hasn't played since the 90's.

I don't mind Batman showing up in a "Flash" movie, just as long as the movie is still about The Flash.
Posted by Shawn Hoelscher at 8:37 PM