SXSW on Amazon: "My Darling Vivian" 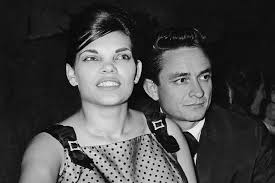 Did you ever see "Walk The Line" from 2005? The Johnny Cash biopic starring Joaquin Phoenix? It featured a great Phoenix performance and it also featured Reese Witherspoon as June Carter, who would become Johnny Cash's second wife. Ginnifer Goodwin had the thankless role of playing Vivian Cash, the first wife of Johnny Cash. In "Walk The Line," Vivian is portrayed as jealous, intense, and unsympathetic toward Cash's lifestyle. All throughout Johnny Cash's life, Vivian was always shunned away, making it seem like June Carter was Cash's one and only wife, which was simply not the case.

"My Darling Vivian" tells the story of who Vivian Cash really was. And anybody who has been a die-hard Cash fan may be surprised by the findings here. This is a documentary, told through several interviews between Cash's daughters he had with Vivian. Cindy, Kathy, Tara and Roseanne all discuss how their parents met, how they fell in love, how Vivian reacted to Johnny becoming a rock star, the lifestyle that ensued, how she reacted to Johnny leaving him and her true feelings toward him as it got closer to his death. Like I said, you may be surprised by who the real Vivian was according to her daughters.

Would it surprise you all to learn that even after Johnny left Vivian for June, that she still loved him? Would it surprise you to learn that a part of her never got over him? That even after his death, she still loved and cared for him? Would you know that at the concert honoring Johnny's life, one musician dedicated a song to Vivian and it was cut from the broadcast? The world treated Vivian Cash as a leper, vilifying her in Johnny's life. She was accused of being black in the South and Johnny had to prove it false if he wanted to continue getting gigs in the South. She went through a lot and there are plenty of misconceptions around her as a person. The Vivian according to her daughters is that she was a loving, bright person. She raised all four of the girls to the best of her ability, often acting like a single parent while Johnny was out and about. The point of the documentary isn't to in turn vilify Johnny Cash, just to set the record straight on who Vivian was as a person.

The daughters don't remember all of the events quite the same. So its easy to dismiss the information, memory is a funny thing and sometimes when making a documentary, you can lose your audience. There was an intriguing video on YouTube about how Documentary's lie to us, and its easy to be weary of the information presented here.

I don't know if what the girls is saying is true. It could all be hogwash. But the way the information is presented, I like to think that Cash's daughters told the truth. I think that there was still lots of love for both the parents even within a separated house. This is an account of a woman who was stronger than anybody ever gave her credit for and I'm not sure I'll be able to watch "Walk The Line" the same way now. Sometimes fact is wilder and wiser than fiction, and that ain't bad.

FINAL GRADE: A
Posted by Shawn Hoelscher at 7:28 PM