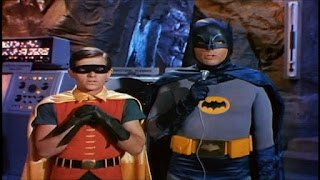 Welcome to Nights in Gotham. An ongoing project where I'll be taking a look at Batman in various forms of media and reviewing and partially analyzing the character through the years. As a fun lead-up to the upcoming "The Batman" in 2021.

As far back as I can remember, when discussing Batman in screened media, there is has been an endlessly incorrigible debate about who is Batman is and who he isn't.

I remember when I was a teenager, when the "The Dark Knight" was about to come out. I remember being one of those Batman fans, where I was a try-hard who was trying really hard to be edgy and cool and only thought Batman could be dark. I didn't think anything else was true Batman. Even though when you look at the history of the character today; Batman has been campy and funny, Batman has been serious but still comic booky and he's also been unapologetically dark at times too. I think that's why everyone loves Batman so much. He can be anything to anyone, and he's survived his long history with ease.

If I saw the teenage version of myself though, I would smack him upside the head. Because there is absolutely nothing wrong with fun and campy Batman. In fact, the older I get, the more I realize that comics being dark for the sake of being dark, is really goofy. I mean, when you get down to it, would you really be that intimidated by a guy running around in a batsuit? Try hard and think real life for a moment, would you really be scared? Yes, he's had serious-toned stories and I've enjoyed many of those stories. But my favorite Batman is that which doesn't shy away from his history and doesn't mind the silliness.

I think one of the reasons I continue to be so smitten about the Marvel movies is because they are unashamed to be movies. They are unashamed to wink at you. Yes, the series really had to work at becoming what it is today. I remember back in 2011 how careful Marvel was to talk about "Thor," since he is the God of Thunder. There was plenty of overexplaining in those days. Trying to deduce that the what looks like magic to us is really science to the Asgardians. The audience flipped for him though. They eventually flipped for a talking raccoon and a walking tree who could say a total of four words. They also flipped for a guy who can somehow communicate with ants. They flipped for a rock alien with an Australian accent. Every single B, C and D list Marvel character is now pretty much an A list character. All because Marvel refused to not lean into what made a comic book a comic book.

"Batman: The Movie" is a really wacky movie. The Penguin, The Joker, The Riddler and Catwoman get together to dehydrate people with a special gun. They are turning people into dust with glee. There is a moment has to use an anti-shark repellent and the shark explodes. There is a moment where Batman is running through Gotham City carrying a giant bomb, trying to get it away from the citizens. The villains travel via submarine and the submarine is shaped like a penguin. It's a goofy, goofy movie but its fun as hell.

I have always said that it really depends on the character upon whether or not their stories could be dark, and I think part of the reason why so much of the DCEU failed is because they took characters that have never been dark and tried to make them dark, and it came off too weird. You can't honestly tell me to be intimidated by a guy named Captain Boomerang. It's never going to happen. You can't tell me that a mopey Superman works, its never going to happen. Batman is one of those characters that can work as long you are confident in your material and you have a sense of tone (there will be some movies in this series that were very tone-deaf, and we'll talk about those later) anything can work.
Posted by Shawn Hoelscher at 6:44 PM