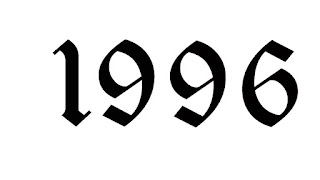 The Golden Years is going to be a column where I take a year that was absolutely profound for movies, where the pros overwhelmingly outweighed the cons, and discuss why that year was so great. I will look at years that have been lauded by several critics and movie fans alike to dish my two cents on them as well. It's no secret that some movie years are better than others, so why not celebrate them?

What was so great about 1996? Well, quite a bit actually.

1996 Was the start for the Anderson's
Two of the most amazing gifts 1996 brought us was the beginning's of the Andersons. I am talking, of course, about both Wes Anderson and Paul Thomas Anderson. Two of my most favorite filmmakers working right now. Wes Anderon gave us "Bottle Rocket." Of course, it starred the Wilson brothers. ALL of the Wilson brothers. You may know Owen and Luke the best, and that's okay, they are the biggest. But there is also their older brother, Andrew. Telling from "Bottle Rocket," Andrew is funny as hell, and I can't believe his career didn't take off like his brother's did. "Bottle Rocket" may seem like a dimwit comedy about dimwitted career criminals, but in the hands of Wes Anderson, it made to feel original. Everything you love about the Wilson brothers is right here, and some of Anderson's quirky signatures were created here. This is ground zero, and Anderson needed this in order to lift off.

Paul Thomas Anderson's first film was "Hard Eight." As you watch "Hard Eight," it may seem very random. A man named Sydney, played by the amazing Philip Baker Hall sees a man sitting in front of a diner. This man is named John and John is played by John C. Reilly. (both actors would be PT Anderson regulars throughout the 90's). Sydney offers John a cup of coffee, and Sydney then finds out that John has been unsuccessfully gambling and needs $6,000 to pay for his mother's funeral. Sydney is actually a great gambler and decides to take John under his wing. He then takes him to Las Vegas where teaches him to comp hustle the casinos. Two years later, John has payed off his mother's funeral and has become Sydney's protege as a gambler. The plot only thickens from there, and PT only keeps things riveting. It's a wonderful character piece. In both films, you can see the potential each of these men had, and why they caught on with viewers.


Even though his last name isn't Anderson, I have to give it up to Baz Lurhmann for making quite the sensational footprint in 1996. Now, "Romeo + Juliet" wasn't his first movie. "Strictly Ballroom" was his first movie, but it was "Romeo + Juliet" that put him on the map. I'll be honest, I didn't really take to "Romeo + Juliet" the first time I saw it, but then again, I didn't take to "Moulin Rouge!" the first time either. Both of those movies I love unabashedly today. When you walk into a Baz Luhrmann film, you need to be able to open your mind and give yourself completely to it. Otherwise, there is really no point, and you'll be bored. Taking William Shakespeare's classic play and putting a modern, futuristic, colorful and stylish spin on the whole thing was weird the first time, but I can acknowledge the genius of it now. Shakespeare's plays never existed in our reality, just listen to the way he wrote dialogue. Shakespeare survives through reinterpretation, and if I want to see a regular museum piece, I will...simply go to a museum. Much like his other films, Luhrmann creates a world that you positively want to get lost in. Leonardo DiCaprio and Claire Danes seem up to the task of interpreting this hyperactive world and they do so with aplomb. But man, the underrated Harold Perrineau nearly steals the show from them.

One of the Best Movies of the Decade
As this column move forward, one thing you will probably notice is that anytime I write about a great year in film, the year question will more than likely feature a Coen Brothers movie. 1996 was no different. One of the best films of the entire decade. I am talking, of course, about "Fargo." "Fargo" is a movie that still blindsides me every time I watch it. Everything comes together in it perfectly. I love the characters, the actors, the sets, every piece of music. Everything is the perfect ingredient and it all works well together. This is the movie that pretty much made William H. Macy a star, and its a little funny how much the script through him off. Frances McDormand has never, ever been better and she's been amazing before. Its quirky and it is stone cold and I am forever mesmerized how the Coen's can keep so much control over the thing. It's cred has moved up as "Fargo" has made its way further into popular culture, but just seeing where that all started is important.

Best Marketed Movie of the 1990s.
1996 was the year that I really saw the power of marketing and how it can be used to get people buzzing to see a movie. Even at a young age, I watched marketing cast a spell over me that nobody could shake. I would argue that "Independence Day" was probably the best marketed film of the 1990's. Those early commercials, of the giant spaceships covering the big cities, it definitely drew me in. Seeing a spaceship blowing up the White House, that was the image that struck everybody though. Due to a recent terrorist attack at the time, there was talk of getting rid of the image, but Fox held firm and it certainly paid off in the end. I've loved "Independence Day" all my life, yeah its a goofy alien movie, and I love every moment of it. I don't care who knows.

The Best Bad Movie of the 1990's
It seems every decade needs their "Manos: The Hands of Fate" and their "The Room." A bad movie that somehow is able to draw viewers in, making remarkably striking moments and characters out of a terrible, terrible script. Taken as a whole "The Island of Dr. Moreau" is a trainwreck. It's true, its a trainwreck. There's a great documentary on Amazon Prime Video about the making of the movie and it was riddled with problems from the very beginning, its profound a movie even came out on the other side. Marlon Brando and Val Kilmer are so over-the-moon strange in the movie that it NEEDS to be seen to be believed, and the humanoid animal make-up was pretty stellar, so good it belongs in a better movie. It's pure madness caught on film. It may not be great, but you won't be able to look away.


Beginning of a franchise
In 1995, "Goldeneye" was released, and it brought James Bond to the 90's. Due to the popularity of the N64 game, this was a movie I never got away from growing up. I love "Goldeneye," but one of the things that eats at me today is how it refused to bring Bond into our post-Cold War world. It feels like a Bond movie made in the 1970's, not 1995. When "Mission: Impossible" came out a year later, that's what felt like real modern reinvention. It was still "Mission: Impossible," but for a brand new era. It does kind of do its own thing as well. I've seen the film dozens and dozens of times at this point and I'd still most likely fail a test on it. Its still such a lush stylish experience, I love every moment of it. I know fans didn't really like it and couldn't stand that Jim Phelps became a bad guy. But I still dig it as a fan of the old show.


Nostalgia
If there was one movie that defined the year for me, it was "Space Jam." At least, that's what my 1st-Grade self would say. I mean you have to remember where I was in my life when I first saw this movie. I was in first grade, and I was doing first-grade dude things. In my first-grade mind, any movie with Bugs Bunny and Michael Jordan in it was the coolest-greatest thing in the universe. Bar none. Michael Jordan and Bugs Bunny playing basketball with the other Looney Tunes against invading aliens? Even cooler. As I have grown, I don't think the movie is nearly as good as I used to. It is a silly, weird movie. Why Michael Jordan's children wouldn't be freaked out by cartoon characters in their house stealing their father's clothes is strange. How Bill Murray knows where to go to play basketball at the right time doesn't make sense. Logic and development go out the window really quick. But it was about the ball-handling and the silliness and nothing more. Still though, a part of me can't part away from it.

From Dusk Till Dawn

That Thing You Do!

With all of these fine examples, I hope you agree. 1996 was a keeper!
Posted by Shawn Hoelscher at 6:17 PM