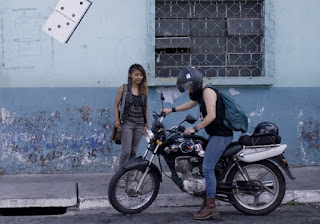 "Gunpowder Heart" is so under the radar as of right now that there is really not much you can find on it. It's an import from Guatemala that was to be shown at South by Southwest last month. It was written and directed by Camila Urrutia, and is somewhat based on experiences that she was at least around while living in the country. Not much can really be found on the movie itself. But boy, was it a powerful experience.

Claudia and Maria are a lesbian couple. They seem to love and care for each other very much at the start of the movie. We seem to get the idea that they've been together for at least of couple of months. They cuddle, they joke, they seem very comfortable with each other. One night they go out for a night on the town. Nothing too crazy. They go to the mall, they dance and drink a little. They eventually make their way to an amusement park that seems kind of isolated. They do bumper cars and other games and rides and when they can't seem to find a bathroom they decide to hide and pee in the nearby trees. That's when trouble finds them. Three men assault and nearly rape both of them, until they are caught by park security.

Claudia and Maria try for a normal life after surviving the assault, but things grow weary between the two of them. Claudia attempts to report the attack, but she has to wait a very long time for the police to serve her only to find out that the precinct has run out of paper. So her complaint isn't taken. Maria has a more personal touch, she plans to use a gun, hunt the men down and kill them. You may think you have "Gunpowder Heart" figured out by this description, but I must say, don't assume anything.

This isn't some cliche, typical revenge fantasy. Instead, its a character study about how people survive assault and how they begin to move on afterward. Its a movie about how the legal system is stacked against the victims and the laziness that can emerge from that. It's a movie about how you want revenge when you've been wronged, but when you are a normal person and not an action hero, how do you achieve it? Should you achieve it? Are you capable of achieving it? What can normal people to make themselves feel better? "Gunpowder Heart" is an unforgiving look when regular people look to violence when we feel like we have no other option and how taking that road affects you.

The two leads dive right into this movie and make the premise believable. This is such a singular, personal take on this material that it doesn't feel familiar, and I love that. There is a very authentic style portrayed through the film. The rape scene is handled delicately to show us it matters, its nothing cartoonish or exploitative like so many movies mistakenly do time and time again. This movie may not go down smooth but its got something to say.

FINAL GRADE: B
Posted by Shawn Hoelscher at 7:40 PM