SXSW on Amazon: "Cat In The Wall" Review 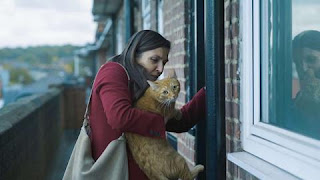 Whether we like it or not, immigration is a big topic in our country right now. It has been ever since 2016 hit. How to control immigration, how we let people into our country, who are good and who are bad, we seem to not be able to get away from it. Sometimes forgetting that the topic we are dealing with is people, human beings. Usually, these people are treated with scorn, even though all we really know about them is they are simply people. That scorn can turn to xenophobia in a hurry and can come off justified if we aren't careful.

"Cat In The Wall" follows a Bulgarian family who has legally immigrated to London, England. It is on the eve of Brexit in the country. Irina Atanasova simply plays Irina. She is married to Vladimir; played by Angel Genov and their son Jojo is played by Orlin Asenov. Vladimir is having trouble finding good work. They live in a municipal building in the multicultural neighborhood of Peckham. Much like other immigrants in the neighborhood, they are not treated the best by their British neighbors. They are just getting by, and Irina is trying to make the best possible life for her family.

One day, the family finds an abandoned cat and bring it into their home. They take it back to their apartment to take care of it. Despite all the negativity and the stress in their life at the time, this little cat slowly brings the family together in a special way. Not just with the kid, but it strengthens the bonds of this family.

You can almost relate. There is a lot of craziness going on simply due to this COV-19 going around. People are doing lots of crazy things. In times like these, its important to remember the little things that give us hope and pleasure. Remembering those things will help us through the times. There is a specific reason why people say its the little things in life. That really makes sense when you really pull that apart.

Having the cat in the house eventually leads to some confrontations with British neighbors, who claim that the cat is there's. These leads to a tense face off  between the two families. This may sound like the movie veers into comedy, but its anything but. This is when the movie really comes to ahead. For most of the movie, the cat in the apartment really isn't the point of the movie, its the wrap-around narrative as the family bounces off what's going on in their neighborhood with gentrification and how their country is on the brink of change. The deal with the cat certainly plays into how the movie ends. This is a stark look at how immigrants are treated in some parts of the world and how easy it is to manipulate a situation through xenophobia.

The cast is solid throughout, and there are great moments packaged here. Sometimes the action slows down a bit at times, but the ending really hits hard and the points are all crisp and clear. Not a bad way to start this little festival at home. Not bad at all.

FINAL GRADE: B
Posted by Shawn Hoelscher at 8:10 PM