Nights in Gotham. Part One. The Dark Knight Trilogy is the superhero equivalent to the Godfather Trilogy. 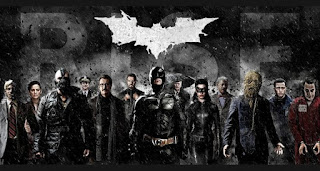 Welcome to Nights in Gotham. An ongoing project where I'll be taking a look at Batman in various forms of media and reviewing and partially analyzing the character through the years. As a fun lead-up to the upcoming "The Batman" in 2021.

I remember, quite vividly, when "The Dark Knight" came out in 2008. I'm sure just about everyone does. It felt like the world as we knew it shifted. It felt like movies were going to be redefined. Not just comic book movies, but actual movies as well. There were many people that were calling "The Dark Knight" the Godfather of superhero movies, and now over ten years away from the hype, it kind of funny how that sentiment has echoed in my mind, especially since that seemed a bit hyperbolic at the time.

When "The Godfather" came out in 1972, people thought they had gangster movies figured out. They thought they would know how "The Godfather" would play but what Francis Ford Coppola showed audiences is that any genre can be retooled, that you can say something new by just approaching it a different way. That's exactly what Christopher Nolan did with "Batman Begins." After both Burton and Schumaker's run, we thought we knew what to expect from Batman movies going forward, but then Nolan makes a movie that blindsides our expectations. Just as "The Godfather" did for gangster movie in 1972.

In 1974, "The Godfather Part II" came out, it transcended the gangster movie to such a degree that it felt like it rewrote the genre as a whole. Not only is "The Godfather Part II" one of the best gangster movies of all time, its easily one of the best sequels of all time. "The Dark Knight" is likewise one of the best sequels of all time. The list of Best Sequels is pretty small list. Most sequels are just a good time, even more than that just tread water, remake the first film because it made money. Rarely, do sequels present a new challenge for their characters or just, at the very least, stick them in a new situation altogether. Sequels tend to swing on familiarity. There was nothing familiar about "The Godfather Part II" and there was nothing familiar when watching "The Dark Knight." Both movies set a new precedent for their genres. They expanded the history and development of their characters and their worlds with glee. While saying "The Dark Knight" is the "Godfather" of the superhero genre is a high compliment, it has much more in common with "The Godfather Part II" than it does with the first movie.

Then there is "The Godfather Part III" and "The Dark Knight Rises."

Look, its not that "The Godfather Part III" and "The Dark Knight Rises" are bad movies, I mean both movies got decent Rotten Tomato scores, since that matters to lots of people out there. They both were so hotly divided viewers that they merely look like failures when compared to their two previous installments. I wasn't alive in the 1970's and I was just a wee lad in 1990, so I don't know what the hype machine for "Godfather Part III" looked like. All I can say is that "The Dark Knight" felt like lightning in the bottle in 2008 and many people, like me, thought that "The Dark Knight Rises" would be not just a great movie, but God Gift To The World. Then the movie hit, and it just wasn't. There are things I like about "The Dark Knight Rises," as there were things I liked about "Godfather Part III" but there is such a gigantic reduction of quality in the filmmaking of both threequels that its hard to believe the same guy that made the previous movies (in both cases) was responsible for the third.

The weird thing is though, in both cases, the first two entries are so beloved that we seem to forget that the third entires in each trilogy ultimately disappointing. That doesn't happen as often as you'd think. Many fans were divided on "The Matrix" sequels to the point that everybody brings it up. People always seem to say that the third "Back To The Future" isn't as good as the previous two, that "The Last Crusade" doesn't have the same magic as the first two Indiana Jones', that the prequels (and now sequels) have stunk up "Star Wars" to the point of no return. "The Godfather" parts one and two seem so disconnected from part three that you'd almost think part three didn't exist. Now, I think "The Dark Knight Rises" is just a bit more remembered, simply because its still kinda fresh and also Tom Hardy's performance as Bane became iconic. Like to the point that its still parodied today. So perhaps "The Dark Knight Rises" won't fall by the wayside that "Godfather Part III" seems to, but perhaps history will continue to tell the tale. We will just have to wait and see.

The big similarities seem so spectacular that I can't help but think of them. For better and for worse, for both their successes and failures, they are similar. I proudly declare that Christopher Nolan's "Dark Knight Trilogy" is the superhero equivalent to Francis Ford Coppola's "Godfather trilogy"

Agree to disagree, of course.
Posted by Shawn Hoelscher at 7:53 PM