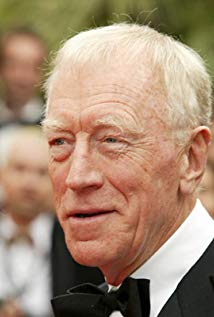 Max von Sydow is one of those actor losses that feels harder than most for me. His career was so extensive that I feel like I almost grew up with him. Even though he starred in plenty of stuff before I was even alive, there was something about seeing him many times over the course of my life, in new movies as I was a budding movie addict, that his loss feels stinkier than most. The performances I appreciate the most might not be the performances that first come to mind, but I guess I am showing my age here. There is no doubt that its these performances that I will come back to the most.

My fondest memory of of Max von Sydow will always be his outrageous performance of Brewmeister Smith in "Strange Brew." For the longest time, Sydow seemed such a serious man, such a stern actor that him playing in a screwball comedy would never be something I'd envision. Sure enough, you should never say never. Sydow's performance has hints of the typical Sydow in villain form, but he's clearly loose in his shoes and its amazing. He's clearly hamming it up and enjoying himself and he's a treat from start to finish.

One of the most underrated films he starred in late in his career, which I think is underrated in both terms of Steven Spielberg movies and 2000's movies as a whole, is "Minority Report." I love "Minority Report" and I ain't afraid to say it. Especially since Roger Ebert gave the film a four-star review and named it one of the best movies of 2002, which I would definitely agree with. Spielberg cast perfectly across the line, and this was one of the first true villain roles I saw Sydow in and he was great.

"Hannah and Her Sisters" is another classic from the 1980's and while Max von Sydow isn't in it as much as I would have liked, he surely makes his presence known and he makes the most out of his screentime. Now I know, its Woody Allen. He's on the list of directors we are all done with right now, but he is one of my favorite filmmakers and his films speak to me on a certain level, so "Hannah and her Sisters" will always be special to me.

"Dune" is kind of a guilty pleasure. Its not a masterpiece by any means and its a really silly adaptation, but for some reason I can't look away when its on. I guess that's just David Lynch for you.

When remembering Max von Sydow today, it seems like the only things people are mentioning are "The Exorcist," "The Force Awakens" and "Game of Thrones." That honestly flabbergasts me simply because there is so much more to his career than those. So I wanted to point out a few that appealed to me the most. Thanks Max von Sydow, you will be missed.


Posted by Shawn Hoelscher at 6:47 PM