I had a good laugh with my parents an my brother on Wednesday night about how the 90's movie "Outbreak" was put on Netflix, just as before all the Coronavirus panic really started to settle in. We like to argue that the media is doing a good job getting people worked up over this, but other variations of the media aren't doing us any favors either. I also saw on my YouTube app at both "Contagion" from 2011 and "The Shining" from 1980 were highly rented in the recent days. Now, "The Shining" may be connected to "Doctor Sleep" rolling its way out to rent recently, but I also wonder if people are watching it because its about isolation? I don't think "Contagion," which is pretty much a spiritual sequel to "Outbreak," is a coincidence though.

I don't want to bag on somebody watching what they want to watch. But man, I don't know if I'd be up for a movie about viruses and horror movies about isolation at a time like this. Don't get me wrong, "The Shining" is a classic and "Contagion" is pretty amazing in its own right. But not at time like this, not for me.

What have I been doing to keep me busy during this time? 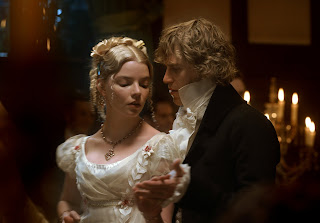 The only 2020 movie I watched this week was "Emma." And I gotta admit, I could have done better with my selection. It's a typical period piece. It is a dry, dry, DRY experience. It doesn't have any twists or turns nor a fun screenplay like "The Favourite" did, and usually period pieces like this are my least favorite movies to sit through. I think Anya Taylor-Joy is a capable, riveting actress and she brings something to each role she takes on. So it's not an entirely bad experience. It's just tough to recommend. It's like a wallpaper. It's nice to look at, and at times beautiful. You may find yourself sucked into the detail and the costumes. But there isn't much passed the surface.

I had a birthday recently, my 31st (dear god) and I got a sizable gift card to Amazon. So I did a big shop spree to add to my ever growing film collection. I got some classics in the bundle, such as "Ace In The Hole," "The Asphalt Jungle," "Rashomon," "All About Eve" and the 70's cult classic, "Phantom of the Paradise." I also got some recent favorites "Parasite," "Knives Out," "Uncut Gems" and "The Lighthouse." If you've been an avid reader of this site, you know why I picked up that list of 2019 titles. I was pretty strong advocate for all of those films during 2019. The first thing I watched last night was "Ace In The Hole."

If you wonder how our media has seemingly spun itself out of control and will do anything for a good story, look no further than Billy Wilder's classic. Billy Wilder was ahead of his time and its almost freaky how relevant "Ace in the Hole" is in 2020. Kirk Douglas plays a Charles Tatum, a journalist who has been fired in 11 markets for various modes of misconduct. His car breaks down in Albuquerque. He decides to con his way into a job at the local paper. He gets his big break a year later. He goes to a small desert town to cover a rattlesnake competition. Once he gets to the sleepy town, learns that the owner of a trading post is lost in a cave. He talks his way into the cave to talk to the man, then comes up with a scheme. Take possession of the story and milk it for all its worth. It may seem like Kirk Douglas's character is an amoral sonofabitch, and that's not wrong. But as people from all over the country to gather around to the spot and pay 25 cents to see the cave, are they any better?

I've got plenty of other movies to keep me busy as this quarantine wears on. As far as TV goes, I've been watching "Dave" on FX and it is another hit for the seemingly untouchable channel. A funny story about an aspiring rapper. But don't worry "Atlanta" fan, this is a totally different style of story with completely different themes and its funny in a totally different way compared to "Atlanta" and I love "Atlanta." I've also got about four episodes left of "Star Trek: Picard" which has been wonderful.

What have you guys been watching this quarantine?
Posted by Shawn Hoelscher at 6:39 PM