I cannot honestly explain how Harley Quinn became such an icon for DC recently. Maybe, for their screened entertainment, the heroes didn't quite work as well as they thought. So perhaps they decided to go the anti-hero and villain route. I mean, it's been working. No matter what I feel about "Joker," it made tons of money, it found its audience and it even got two Oscars last night. Hell, Joaquin Phoenix had a phenomenal season at the awards this year and that is highly respectable. I am hearing some very positive things about James Gunn's reinvention of "The Suicide Squad" and its got all the potential in the world to be amazing.

As far other DC characters go, I never really thought that Harley Quinn would be the center of my DC fandom at any given moment. I never hated the character, she was just not who I expected I would end up loving the most ant any given time. Boy, was I wrong. DC Universe's "Harley Quinn" cartoon is amazing. It is simply amazing. You know what else? That "Birds of Prey" movie? That's pretty fucking fantastic too.

I know, you didn't see that coming. Or maybe you did, I don't know. Either way, my reaction certainly surprised me. I really like Margot Robbie. She may have been relatively unknown before being cast as Harley Quinn, she is one of those lightning-in-the-bottle casting for comic book movies. Yes, she's on the same exact level as Robert Downey Jr as Iron Man or Mickey Rourke as Marv. Yes, she's that iconic and I can't imagine this character ever getting revamped. In fact, I don't want it to. She was easily the best part of "Suicide Squad." The thing is, besides Margot's work and Will Smith's work, the more and more I think of "Suicide Squad," the more I hate it. I knew Margot Robbie could shine in a stand-alone movie. I just didn't like the fact that the stand alone movie in question was going to be "Birds of Prey." Harley Quinn isn't a character associated with that group, and to exclude Birds of Prey's central character (aka Batgirl) and shoving Harley Quinn in it just bank on the popularity of the character put a bad taste in my mouth. I didn't think I'd care for "Birds of Prey and the Obnoxiously Long Title to Explain One Harley Quinn's Presence." I didn't think I'd care for it one bit.

Perhaps it was those low expectations that finally won me over. Maybe the concept and the actors and the style was so wild that it ended up working. I don't know really know what happened but whatever happened, it worked. It really worked. I was pretty amazed by how much I liked "Birds of Prey." Yeah, its different from the comics, but that's not really a bad thing. There is an attitude and a confidence to the movie that is just amazing. It's so freaking bonkers and over-the-top but still has the power to entertain immensely. This is all my way of saying that many people missed out on this one over the weekend and that's too bad.

We are going to be talking about "Birds of Prey" tonight. We are also going to be talking about the cartoon show too. Because like I said, I can't believe how much Harley Quinn is working as a character right now. If you like warped worlds and insane violence and totally weirdness in your comic book movies or shows, you owe it to yourself to see "Birds of Prey" and watch the "Harley Quinn" cartoon.

Its too bad that so many are so afraid of feminism right now, and it sucks that we think its such a bad word in popular culture right now. I don't care if a movie or a show is about all men or all women, if you can tell a great story, create engaging characters...that's all I really need at the end of the day. As I stated above, there was a lot going against "Birds of Prey" in my mind. I think if people actually went out and saw "Birds of Prey" they would be drawn into the strange style of the movie, the enriching and imaginative world. I think people would be impressed by the how strong the characters are here. Yes, there is a feeling of Girl Power throughout the film. Yes, there are bright colors and sugar-high moments. But the characters are that great, and the confidence in every moment of the film makes all the difference.

In "Birds of Prey," Harley Quinn has broken up with The Joker. She's on her own for the first time in a long time. Everybody is after now though, including gangster Ronan Sionis AKA Black Mask (Ewen McGregor), thing is that there are lots of people in Sionis's orbit who could help Harley Quinn be free of him. I love that this looks like the typical superhero movie, but its anything but. They said "Suicide Squad" was to be the middle finger to the comic book movie establishment, but that missed the mark. "Birds of Prey" may be the answer. In the "Harley Quinn" cartoon, Harley has also "broken up" with the Joker. She isn't looking to redeem herself like in the movie though. She wants to prove that she can be a force to be reckoned with without the Clown Prince of Crime. She gets friends like Poison Ivy, Doctor Psycho, King Shark and Clayface to be her crew and she launches crime sprees of her own to be Gotham's next big villain.

Both "Birds of Prey" and "Harley Quinn" revolve around Harley Quinn building a new family after she loses The Joker, the one person she considered her whole world. They both deal with a person trying to create a world for themselves, they are about taking charge of yourself, because it is up to you to move forward in your life. It may seem messed up learning these important lessons in movies and shows about supervillains, but hey, whatever works. The mistake would be to make these stories accessible to young ages, but it seems really wrong for young girls to idolize Harley Quinn in any form. Even though she learns important lessons in her journey in the movie and the show, she is not an person to be celebrated. I am glad "Birds of Prey" ended up being rated R and that her cartoon ended up with a TV-MA. Its true to the character.

"Birds of Prey" is fun because its a terrific ensemble. Jurnee Smollett-Bell plays Dinah Lance, a night club singer who gets too close to Black Mask. Mary Elizabeth Windstead plays Helena Bertinelli, a vigilante who wishes people just knew her name. Rosie Perez plays Renee Montoya, a Gotham cop whose cases are always being credited by men. Then there is Ella Jay Basco as Cassandra Cain, an orphan who is also a pick-pocket. She steals from the wrong person and sets the whole story in motion. I love that this "team" doesn't ever really become a team, even at the end. This is dressed like a typical superhero team-up, but its anything but. This group doesn't come together, and they all have valid reasons to not trust each other. But they come together for each other, and that's what its all about. Throwing away old rivalries and problems to defeat a greater good.

Can I also just say that Ewen McGregor plays a delightfully terrible scumbag after a career of happy-go-lucky good guys and it was everything I needed? Yes people, don't worry, he sports the mask you want him to for a nice chunk of the movie. 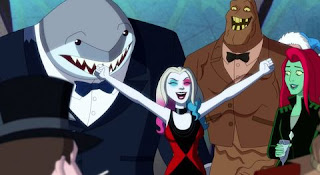 There is so much to love about the "Harley Quinn" cartoon that I am not quite sure I can list them all off. I love that Clayface is always trying to do different acting routines. Because remember, he was a former actor turned villain in the comics. I love that Poison Ivy lives in a leafy apartment instead of a greenhouse. I love that she has a "Little Shop of Horrors-like" buddy named Frank. Frank needs to be comic book canon now. I love that there is a moment where Jim Gordon lights up the Bat-Signal just so he can get relationship advice from Batman. I love King Shark's urban clothes. I love all of Doctor Psycho. I love that Kite-Man is guy we see from time to time. I love the funny website that supervillains use to hire henchmen. I love how The Legion of Doom parodies office life. I love that we get a glimpse of this weird, warped DC Universe that we never see in the comic books. I love that Harley Quinn's landlord goes on crime sprees with her. I think why I love this so much is just how unique it feels. The style this cartoon is calling to isn't the references you think. I love that.

Both "Birds of Prey" and "Harley Quinn" are quite hyper-violent. There is a moment in "Birds of Prey" where Harley is taking down some henchmen with a steel baseball bat that honestly made me cringe. In the cartoon? Well, somebody is always losing a head or losing a limb or dying in such a perverse way that you'll either laugh or scream. Not that "Birds of Prey" is honestly that different. A guy gets blown apart by a grenade for crying out loud. "Birds of Prey" in particular has action scenes that you aren't going to expect. Guaranteed.

I think what I am most impressed by with "Birds of Prey" and "Harley Quinn" is that the movie challenges our empathy. These are all flawed individuals, these are criminals and when you allow your audience to empathize with people of this caliber, it can sometimes be a tall order. Making somebody like Harley Quinn the center of the universe almost seems sociopathic on paper, but the artists behind this movie and this show prove that you can tell worthwhile stories involving any type of person. Its not like they are daring the audience to be just like these people anyway, you can have your empathy challenged without getting a calling to crime.

Harley Quinn of all people has stolen my heart. I love this Harley Quinn phase and I am curious to see how long it lasts. If you missed "Birds of Prey," you are screwing yourself out of a good time. So go this weekend!
Posted by Shawn Hoelscher at 8:07 PM