Awards and Agendas. Everyone is selling you something 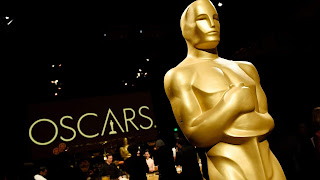 The Academy dropped their 2020 nominations today, and the world went into an uproar. Including the man whose words fill this website. While I may have some harsh opinions about the Academy from time to time, they are just that. They're opinions. I know I can be passionate about what I like and dislike, and that just comes from being laser-focused on something you love. I know I am passionate about my love for movies and I will even regretfully admit that I have been overly-passionate about them. But at the end of the day, these are just my opinions. Whether you listen to them is up to you. I never write in any of my reviews that YOU SHOULD DO AS I SAY because there is no way I could honestly mean that.

At the end of the day, and I don't care what anybody says, that's precisely what The Academy Awards are. Everybody does their own end-of-the-year list, and that's basically what these award ceremonies are, big end-of-the-year lists where the people involved in the movies get to take home awards. I know many people consider getting an Oscar "prestigious," but we got to be honest here, they are just pieces of gold entertainers get to take home because a group of 300 or so Hollywood types said so. If I could give actors, actresses, directors, writers and producers gold statues for all the movies I loved in a given year, I'd do so in a heartbeat. I'd televise it if I thought people would watch and if I did, I'm sure my nominations and choices would be just as controversial as the Academy are every year.

It seems like this year though, people are more upset over the snubs and surprises than usual. Many people are very passionate about what's not there. Some people are very upset over no women being recognized in the Best Director category. Those that argue against this simply say "The five best directors last year were men. Awards should always be about quality." Then there's some harsh comments like "What did women make last year that was so good?" The sad thing is that many of last year's best films were made by women and it was a strong year for them. I think it just shocked many that women were snubbed when they stuck out to many people around the world.

While I empathize, I do understand both points. It can be disappointing when women in the directors chair have a strong year and it goes overlooked, but I don't think anybody should just get an automatic seat at the table when it comes to awards. The thing is, that's a really easy argument to make and its not what the other side is saying. The Academy voting body is mostly made up of old white men, so they of course gravitate towards what appeals to them. That doesn't automatically make them racist or sexist and I think its wrong to simply jump to that conclusion. I'm just not sure they understand what it looks like when they cast their choices. I would love for The Academy to diversify a bit, and really get some more younger, diverse voices in the mix. People that will really help look under every rock when making nominations.

The thing is though. I can't force The Academy to do that. Neither can you. At the end of the day, those pompous 300+ Academy voters are going to have their opinions and I have mine. Does having an award really make a movie better? I would say no. Look at the track record of my favorite films over the history of this blog. Have any of you notice that the movies I pick for the top spot of the year rarely, if at all, get nominated for Best Picture? Do you think that bothers me? Of course it doesn't, I still put all of those movies in my Best of Decade list. Are you suddenly going to think differently about "Uncut Gems" or "The Lighthouse" or Jennifer Lopez's work in "Hustlers" simply because they didn't get nominated for awards? If you answered yes, can you even explain why? Art is subjective, even when its decided by prestigious Hollywood people, its still subjective. Nobody at any point in time crowned somebody the Lord of Film, therefore the awards mean nothing. That's really the truth of it, folks. Even getting an Oscar really doesn't mean anything. Robert De Niro and Quentin Tarantino aren't suddenly going to be out-of-work if they don't win on February 9th. Movies like "The Big Lebowski" didn't get nominated for shit, it was a commercial and critical failure upon release. Yet, it found its audience years later. While there have been plenty of movies that won Best Picture that are barely discussed anymore.

The way you still win in the end is if you continue to spread awareness about the movies you love. For those I mentioned earlier asking about what movies women made last year? Well, Lulu Wang made "The Farewell," Olivia Wilde made her directorial debut with "Booksmart" and Jennifer Kent made the utterly unforgettable "The Nightingale." Those are the three that spring to mind at first and there's a handful more like "Hustlers" and "High Life" that were also made by women. All of those movies I mentioned are far better than "Joker." I am sorry to say it but while I think Phoenix deserves the nomination, its really getting way too much attention for being a remake of "Taxi Driver" with a comic book gimmick. I also wonder if any of the MEN (surprising, huh?) making these claims that women didn't do anything last year...I wonder if any of the women I listed in this paragraph actually DID take the spot of say...Martin Scorsese or Quentin Tarantino? Would they still be saying "hey, the top five got nominated" or would they call it PC pandering? It's a lose-lose situation, and people are going to bitch just because its the internet and everybody does.

The Academy already does enough selling you things. And believe me, they do. So many people can't stand award seasons because of how much stuff gets thrown at their faces. Just look at the last two decades worth of Best Picture winners. They are all historical movies or they make some type of political/cultural/social statement. Sure, maybe every once in a blue moon, something like "Birdman" gets best picture, but those are few and far between. If you honestly think "Joker" is taking Best Picture over anything else in that category, you are probably going to end up disappointed. The Academy loves selling you things without making it oblivious, which is just another reason why its easy for me to not take any of this seriously, despite my gripes.

In closing, The Academy could do plenty of things and make many changes that could only make them better. But at the end of the day, they are either going to do that or they won't. Remember, despite what people say or how much ABC is going to push it or what filmmakers and actors are going to try to get you to believe...awards are just awards. Not much changes for those who win them, and those who lose still get plenty of work done. Think of all the actors who have won an Oscar on their first movie...many of them didn't go to bigger things, especially over last decade. Winning an award only helps marketing, its a nice thing to throw in front of a commercial. That's it. It kills me that DC fanboys honestly think that if "Joker" cleans house on February 9th that Marvel will be "in trouble" or "will cease to exist" or "will stop making movies" or half the other ridiculous things they say. I simply don't want "Joker" to win because I don't want those toxic fans to feel like they have validation to continue to be cruel to Marvel fans. Toxic fandom is already a huge problem and we don't need to add fuel to the fire. But what will happen next month is going to happen. But if DC fans truly think Marvel fans are going to stop going to Marvel movies, they are mental. Because the Marvel fanbase is one of the most dedicated, most sincere and most heartfelt fandoms existing right now.

Instead of worrying about validation, instead of trying to add significance to a movie it doesn't need, instead of getting overly salty about what did or didn't get nominated, celebrate the things you love. How a movie shapes you is special for you and no award or nomination can take that away from you. So celebrate "Uncut Gems." Celebrate "Little Women." Celebrate "Rocketman." Celebrate all the great horror movies that came out last year that The Academy ignores every year. Keeping all great movies relevant is the true award.
Posted by Shawn Hoelscher at 6:36 PM