A Look at the 2020 Academy Award Nominations 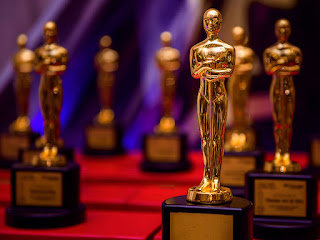 They're in. They're here. Hollywood's Super Bowl is ready to commence! The 2020 Academy Awards nominations are here and just like every year, there is a tremendous avalanche of surprises and snubs. Let's take a look and see what those surprises and snubs are...

I am starting to think that one of my worst fears is about to be realized. "Joker" has been nominated for eleven awards. That's way more than I ever would have given the movie credit for. I was expecting Phoenix and Phillips to be nominated for Best Actor and Best Director. But Best Picture? Film Editing? The attention this movie is getting is a little surprising. I know its not your average comic book movie and I know it made lots of money. But I just think it gets WAY too much credit for simply being a remake of "Taxi Driver" coupled with a comic book gimmick because that's what's popular right now. If "Joker" just so happens to have a good night, do you all realize how annoying the hardcore DC fanbase is going to be? As a Marvel fan, its going to get really annoying really quick. While it is nice to see DC on the up and up, it'd be nice if they were celebrated for movies that were actually great all around (I'm looking at you, "Shazam!") The first comic book/superhero movie to receive tons of nominations came last year with "Black Panther," and it was the first superhero movie to receive a Best Picture nomination. "Black Panther" had a great night last year, better than I would have expected. The thing is "Joker" is not nearly the movie "Black Panther" was, say what you want but that's what I think. I don't think "Joker" needs this much attention.

Looking at all five Lead Actor nominees, I am a little shocked to be honest. They are some very safe picks all around. I know a few years ago, The Academy received lots of heat for having no minorities in the four main acting nominations. I can't believe that Eddie Murphy got overlooked. I mean, I understand the anti-Netflix sentiment within the Academy, but Murphy in "Dolemite is my Name" is a once-in-a-lifetime achievement. I know the Academy is pretty anti-horror as well, but I don't see how anybody can look at me with a straight face and tell me that Lupita Nyong'o wasn't flawless in "Us." I guess the Academy should just be happy they included Cynthia Erivo for "Harriet" because they probably would have got a ear full again. While I did write about how I disagreed with the #OscarsSoWhite movement when it happened, it also annoys me when the Academy plays it safe, and when any actor pushes themselves, they should be recognized.

Which leads me to Adam Sandler..."Uncut Gems" got zero nominations. You read that right, folks, ZERO NOMINATIONS. Are you fucking kidding me? I'd say that looking at the Best Lead Actor nominations, they have basically set Phoenix up to win, and I can't believe that Sandler, another guy who just gave a once-in-a-lifetime performance hasn't been recognized at all! That's not just for the Academy, but also every award ceremony this year. Why no love for Sandler and "Uncut Gems"

I know these snubs were going to be longshots, but I just don't understand why horror can never get recognized. "Midsommar" was the most gorgeous movie to look at last year, and I can't believe they couldn't get a Best Cinematography nod and a Best Original Score nod would have been nice too. Wilem Dafoe should have been recognized for his work in "The Lighthouse." Jordan Peele getting an Original Screenplay and even Best Director nod would have been nice as well. All I am trying to say is that if we are really trying to distinguish the best of the best in movies, NO genre should be overlooked.

Despite all this bitching, I am happy about a few things. I love that "I Lost My Body" is in the Best Animated Feature category, even though it probably won't win. I also love that "Avengers: Endgame" is in for Visual Effects, but if last year was any indicator, something like "1917" OR "The Irishman." The Academy seems to lean into practical, even though the Marvel movies have doing some spectacular things with de-aging effects and creating unbelievable worlds. I am hoping that Laura Dern does come out on top for her work in "Marriage Story" for Supporting Actress and it seems like that's a done deal. Seeing "Parasite" in the mix for Best Picture is great, but since its win for Foreign Language Picture is pretty much guaranteed, it probably wont get top honor.

I can also empathize with people saddened that no women got nominated in the Best Director category. I have yet to see "Little Women" myself, but I know how talented Greta Gerwig is and I love her as a filmmaker. For me though, I can't believe Lulu Wang also got snubbed, in fact the lack of "The Fairwell" is rather disturbing. I would have also thrown Olivia Wilde in the mix for her work making "Booksmart."

Here are the Oscar Nominees in full, from Variety: 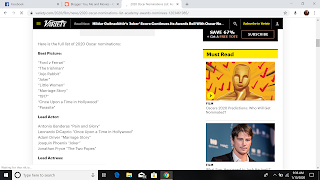 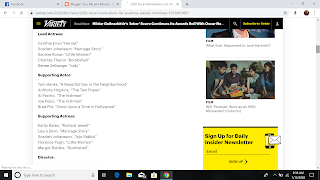 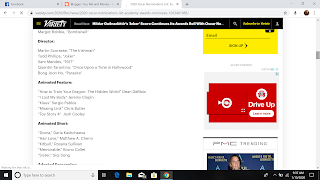 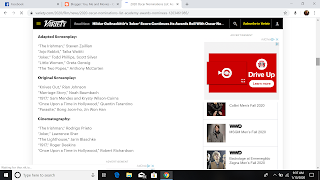 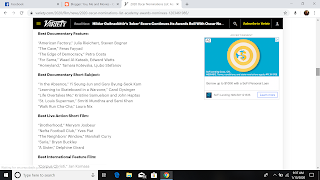 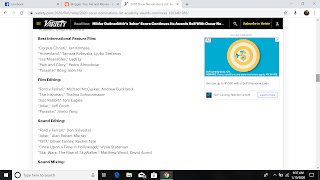 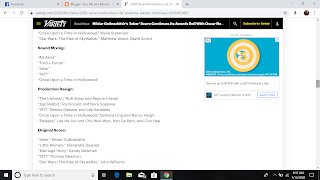 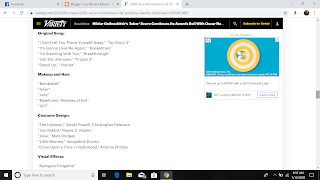 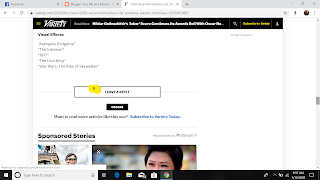 Posted by Shawn Hoelscher at 7:40 AM