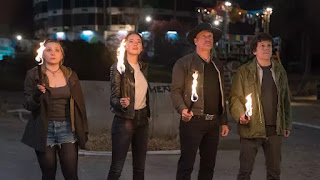 Tonight, I am hitting two birds with one stone. A new edition to my 31 Days of Halloween series as well as a new review of "Zombieland: Double Tap." I loved the first "Zombieland" that came out a decade ago. I wondered, if a sequel could work all these years later. That sort of thing was always hit or miss. I can tell you from the opening frames, this sequel gets too you. The very image of the girl from the Columbia Pictures logo starts fighting off zombies, this was going to be something that was going to be fun.

We are quickly reacquainted with our heroes from the first film. Columbus (Jesse Eisenberg), Tallahassee (Woody Harrelson), Wichita (Emma Stone) and her sister Little Rock (Abigail Breslin) are all thriving in a world taken over by zombies. In fact, they've made the former White House their home. But there is trouble in paradise. Little Rock is struggling because she doesn't have anybody her age to relate to and hang out with. Columbus also wants to take his relationship with Wichita to the next level, but she doesn't want to commit to marriage. Fed up with the same old, same old, Wichita and Little Rock leave the boys behind.

Columbus feels heartbroken, Tallahassee is mad they took his car. Columbus bounces back in a relationship-of-sorts with a girl they find named Madison (Zoey Deutch), and the boys plan to just move on. Its only when Wichita comes back because Little Rock ran off with a pacifist that they regroup to make sure Little Rock is okay. We then get a road movie as the newly formed group go on their way to find Little Rock, having a whole host of adventures and misadventures on the way.

There is a slick sense of humor throughout the whole movie. This film is just as funny as the original, just as bloody as the original. The action seems to pop out at you more than the first film did. It's a big ball of bloody fun, from start to finish. The zombies are both deadlier and funnier this time around. Some zombies have evolved and have become harder to kill, while others are dumber. I love that the movie recognizes that time can change and presents new challenges for our heroes.

The thing is, this could have easily been maybe a short film. The journey from point A to point B is actually pretty small. There is tons of filler in this movie. There's a scene where its possible Madison might be infected. There's a scene at the home of Elvis where Tallahassee meets a crush. There's a scene where we meet parody versions of Tallahassee and Columbus. Had all of this been edited out, it would feel like a bunch of deleted scenes you find on a DVD, and it cut the film down enormously. People like zombie movies because of the zombie action. No doubt about it, but this feels more like filler than anything else.

So its good thing its funny, otherwise the movie wouldn't be nearly as entertaining.

This is very fun entertainment. There is a handful of predictable yet joyous outcomes, everything wraps up in a nice bow and nobody important dies. But hey, this is the type of movie that is self-aware enough to evoke laughs from its simple premise. There are moments where the movie works as self-parody. This movie, much like its predecessor, plays for laughs and is never really scary. No matter what, its fun until the end. Where a certain someone makes another cameo.
Posted by Shawn Hoelscher at 7:53 PM