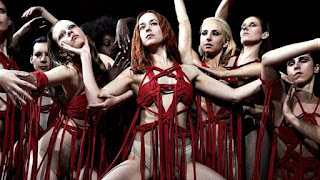 Can a movie work as faithful homage and film criticism to another movie?

Look, Dario Argento is a horror genius. He is completely unique as a filmmaker. Nobody even remotely makes movies the same way he does, and he created his own visual signature over the course of his career. Many of his films don't make much logical sense, and sometimes it feels like there really isn't a narrative present in the movies. For horror movies, sometimes that doesn't really bother me. Argento's movies feel like somebody recorded a person's nightmare, then turned them into movies. If I was given a quiz on a random Argento flick, I'd probably fail. But that doesn't matter, his films mostly get under my skin every time I watch them. I don't always watch movies, mauling them over to make sure they make sense. I go for the experience, and those Argento flicks in a nutshell, experiences.

Other times, that can go too far. Suspiria was 1977. It was apart of a trilogy of films by Dario Argento called "The Three Mothers" trilogy, along with "Inferno" in 1980 and "Mother of Tears" in 2007. There is little to no connection to the three films on a surface level though, and Argento fails to connect the movies in a significant way. They aren't even really supposed to be spiritual sequels, its supposed to be a full trilogy, even though it never feels that way.

The 2018 remake by Luca Guadagnino is rare kind of remake. What I mean by that is, I feel like I can hardly call it a remake. Much like I don't call Stanley Kubrick's "The Shining" a remake. What Kubrick did with Stephen King's classic novel was keep the spine of the story, but did something completely different with it. It was Kubrick's reaction to King's book, instead of a straight up adaptation, and its something I always find fascinating. Guadagnino's remake of "Suspiria" is very much a reaction to what Dario Argento originally made. The spine of the movie is there. Yes, the remake is very much about a dance school in Europe run by a witch coven, but its a totally, completely and exclusively a different movie in Guadagnino's hands. Gone is the lavish color that so much defined Argento's work. Gone is the subtle parallel to "Snow White and the Seven Dwarves," and in comes a vision that is wholly original but at the same time, paying respects to Argento's classic.

Even though its not the same type of movie as the original film and doesn't possess many of the same scares, "Suspiria" is frightening as fuck. If you like subtle horror, the dream sequences in this movie will be enough to haunt your nightmares for years. If you like horror that makes you squeamish, not to worry. The cringiest body horror scene I can think of in recent memory occurs in this film. There is a moment when a dancer accuses the dance instructors of witchcraft and being responsible for the disappearance of her friend at the school. She attempts to flee, but is disoriented and finds herself in a room. When another dancer begins to dance, it does horrible things to the trapped woman's body, throwing her around the room like a rag doll. You feel every hit, every ounce of pain. When urine begins to flow out of her body, I wanted to crawl out of my skin. There is a type of horror in this movie for everyone.

Let's talk Tilda Swinton for a moment, because she actually plays three separate characters in the movie. She plays the leader of the dance school Madame Blanc, she plays one of the witches we meet at the end of the movie and she plays Dr. Joseph Klemperor, a man who knows much about the Three Mothers coven. Yes, Tilda Swinton plays a man, and instead of it being comedy, she plays it completely straight. I thought for sure the choice would fall flat. I was getting Eddie Murphy and Tyler Perry vibes just thinking about it. By the end of the movie though, Tilda Swinton should have won an Oscar. It is truly mesmerizing work. She totally disappears in the role, never letting on that its a woman in man's body. She never once gives herself away. Dakota Johnson is an even bigger discovery. I used to think this actress didn't have range, or anything relatively looking like talent. Boy, was I wrong. Dakota Johnson is flat out dangerous in this movie, and I think her career is really starting to turn around.

What I meant by a movie being film criticism at the beginning of my review is because it seems like Guadagnino is calling out Argento in his own remake. I think Guadagnino maybe a little frustrated that Argento's films didn't quite connect the way he wanted them too. Guadagnino's film leaves some things unanswered, leaves some things open for interpretation. But there is definitely a beginning, a middle and an end to this film. There is greater attention toward the history of this coven and what exactly their endgame is. I was surprised because it does tell a story but leaves that nightmarish feeling intact all the way through.

I feel like every time I put this one, I am discovering new things. I study every frame of each scene. I feel like I get more out of it the more times I watch it. I may even go as far to say that I could easily have a different opinion of this one later on. But there is no question that the movie gets under my skin every time I watch it. In October, that may be all you need.

Posted by Shawn Hoelscher at 7:50 PM