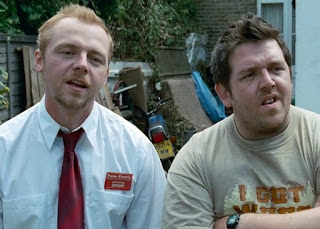 It's the first of its kind, and we really haven't seen anything like it since.

What is a Rom-Zom-Com? Why, its a romantic zombie comedy of course. Its a movie that is tremendously funny, sincerely sweet and bloody disgusting all in equal measure. This is a romantic comedy that I can truly get behind. Directed by Edgar Wright, who gave us the likes of "Hot Fuzz," "At World's End," "Scott Pilgrim vs. The World" and "Baby Driver," "Shaun of the Dead" is also a movie I love very, very much.

Simon Pegg and Nick Frost have collaborated on a few movies with Edgar Wright and they always create some spectacular results. Pegg plays Shaun, who is just another Joe Schmoe in this world trying to make it. Shaun's best friend is Ed, played by Frost, they live in a flat together and spend lots of time together as buddies. The thing is, Shaun has been in a committed relationship with a girl named Liz for awhile now. She's ready for more and she's not sure Shaun is ready for more, though. They break up, and Shaun is heartbroking. All the while the early stages of a zombie apocalypse is happening all around them.

There are some great gags hidden in every inch of this movie. I have always been interested in what happens in the time when the zombies begin to take over to the point where these movies usually start, at the tail end of things. One of my favorite openings to any movie is Zack Snyder's "Dawn of the Dead," which ironically came out the same year as "Shaun of the Dead." It's both scary and exhilarating watching the world unfold into madness in the midst of a zombie apocalypse. "Shaun of the Dead" does something similar, just in a very funny way.

Fighting zombies with vinyl? Classic. Finding refuge in a pub? Funny. Fighting the undead to the sound of Queen? I love the scene. It's clear that Edgar Wright has soaked many comedies, zombie films and yes even romances to so gleefully poke at them the way he does here.

Posted by Shawn Hoelscher at 5:09 AM