I didn't write last night, so you guys are getting two write-ups for the price of one! 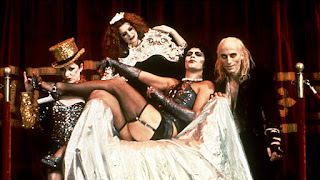 As much as I talk flicks on this website, I am a man of many interests. I like to think that I also have a decent ear for music. I sang the choir in high school and tried out a few different random instruments at weird times in my life. So when I watched this for the first time, and when my screen was completely filled by an exaggerated mouth singing about a double feature, I knew the movie had me. Yes, I am a sucker for a great musical, and "The Rocky Horror Picture Show" is a great musical. Its full of great energy. Tim Curry is a guy whose got a full great career, but his work as Frank-n-Furter is some of the very best of his career. I found myself singing the songs over and over after seeing this, getting them stuck in my head completely. What I love most though is that it truly is a celebration of the entire genre as a whole. 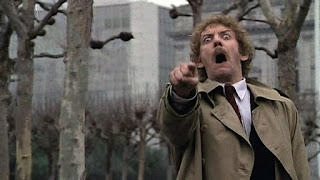 Usually, remakes are always hit or miss. One remake I watched recently that I haven't been able to get out of my head has been the 1978 "Invasion of the Body Snatchers." A movie that matches the fear and paranoia created by its predecessor. When the first film was made in the 1950's, it was at the height of the Red Scare going on around the world, and Americans thought their country was quietly going to be taken over by Communists. It was a credible scare back then, and you feel that tension in the movie. By 1978, we hadn't completely gotten over that Red Scare yet, and tension with the Russians was still continuing, and like I said, this remake brought all the anxiety and scares brought in the first film, and amplified them in a new skin. I never thought a dog with a human head would ever be scary, and I remember seeing photos of the scene and laughing. Watching it in the context of the movie though, its quite creepy. The movie features an all-star cast and features one of the most heartbreaking endings in a horror movie ever.
Posted by Shawn Hoelscher at 7:51 PM