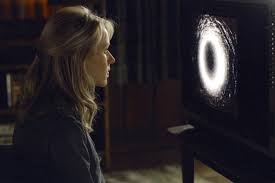 I was behind the curve on "The Ring," which was something I wasn't used to. Even as a budding film geek that I was in middle school. I had an internal notorious feeling toward the movie. All of my peers at seen the movie and it was all they seemed to talk about. I didn't see the movie for the first time until it came on video. I always tried to see beforehand, but I just never got the opportunity. But I heard how scary it supposedly was. I remember I had one friend who told me that when I eventually see the movie, he gave me three rules. Don't watch it alone, don't watch it at night and don't watch it in the dark.

One day during spring break, the movie landed in my mailbox via Netflix (remember when Netflix used to do that??). My parents were both at work, and I was curious as hell. I remembered what my friend told me. In was in the middle of the afternoon, it was a bright, sunshiney day, my whole house was lit up like a Christmas tree. I would only be breaking one rule. I quickly threw the disc into my player. Was it really as scary as everyone said it was? While I was pretty freaked out after that first viewing, I was obsessed with it. I loved every moment of it. I began talking about it to anyone who would listen. I told my mom about it, I told my dad about it. I was so smitten with it that I had my dad watch with me a second time that night. So I had watched the movie twice the first day it came to my house.

I seemed pretty jazzed up until the moment I tried to sleep. Then I couldn't sleep. Creepy images from the film kept slipping into my memory, and I was unable to shake them loose. I did not sleep at all that night. I tried several times, but Samara and her crazy creepy mother made sure I did not. When the sun rose the next morning, I took that Ring DVD, put it back in its Netflix sleeve and marched it right back to my mailbox.

The movie wasn't just a sensation for horror fans. It did fairly well at the box office. It was a critical success, something that didn't happen a lot that decade for horror films. I think why the film was so successful was for many reasons. First, it was nice to have a horror movie that was actually scary. It seemed for much of the 1990's, the horror genre took a break. Yes, we got stuff like "The Sixth Sense" and "The Blair Witch Project" sneaking in but it was a dead-end for horror for the most part. So it felt fresh in the early 2000's to see something that was actually scary.

In more ways than one, "The Ring" was structured like a normal horror film at the time. It didn't feel or look like a typical mainstream horror film entry. Where were all the teenagers who can't act? Where were all the unlikable characters who make dumb decisions? Where were all the cheap thrills and buckets of blood? "The Ring" wasn't made for that, it was made to scare the absolute shit out of you and that's exactly what it did. The characters in the movie weren't dumb, they were proactive trying to save themselves and save the ones they love. The characters were relatable, they seemed like normal people, they didn't make dumb decisions. So when their lives were in peril, it mattered much more. Plus, Naomi Watts is an amazing actress, one of my personal favorites, and she really sold the thing.

The movie had near perfect cinematography, it had great music, and Rick Baker's make-up? Dear god. I can't even think about it. I don't want to think about it. It gives me chills thinking about it. There are always a bunch of little things that make a movie work and when those small things are all adding up, it can make the movie even more amazing.

"The Ring" also just feels like an assault. It worked on alot of people because it showed us things that even most horror movies don't dare. Children dying? Nope. And the scene with the horse is truly unforgettable.

"The Ring" is always going to have a special place in my heart, no matter what.
Posted by Shawn Hoelscher at 7:35 PM