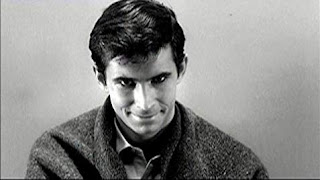 There was a lot that went into "Psycho" that could have easily hurt the film.

In 1960, the movie was taboo-breaking. The movie opens with a married man laying in bed with a woman who had no top on, revealing her bra. Up to that point, a man and a woman in bed together was never seen, forbidden due to the Production Code. There would never be a movie about infidelity. A woman would never bare themselves like Janet Leigh did in the opening moments of the movie. At that point though, the legendary Alfred Hitchcock was only getting started. (Movies definitely didn't feature transvestites either.)

Had "Psycho" only been about a lonely secretary who finds true love with a married man, who is down on money. Only steal money from her employer to go be with him, that would have been enough for one movie. There are plenty of thrills in the first half of the movie when Janet Leigh is taking money from work and driving cross-country to be with her boyfriend. She makes mistakes along the way, and she isn't very convincing about getting out of hot spots. The first half of the movie really tricks you in a lot of ways. You don't realize you are watching a horror movie until much later in the movie.

Once Janet Leigh gets off the highway on her way to California, stopping at the Bates Motel, things start to slowly build towards horror. Anthony Perkins plays Norman Bates, he was an actor known for the playing the boy next door. While there are a couple personality traits that feel a little off, he still has that boy-next-door feeling to much of the introduction to Norman Bates. All of that goodwill built up slowly leaves as we see him looking through a peephole and Janet gets undressed for the shower.

The shower scene is a famous scene that has been parodied over and over again at this point. But even in black-and-white, even though no real explicit violence is shown, its still a harrowing scene. It might also be because I have the movie on blu-ray, but you can almost see Perkins glaring in the darkness, which makes the whole scene scarier for me.

The movie features some of the best music in all of horror movies and how Hitchcock uses music and silence to punctuate scenes is rather remarkable. The sounds effects used when Bates kills someone have equally grown iconic over the years, again constantly parodied. But those sounds still hold much water when watching the movie start to finish. "Psycho" hasn't lost any of its dread, no matter how old it is.
Posted by Shawn Hoelscher at 7:46 PM