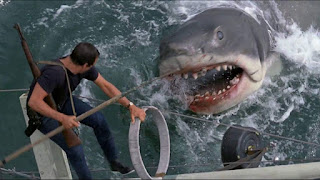 "Jaws" is a landmark of a movie in many regards. Up to this point (that being the year 1975), horror movies were B-movies. They were pretty much independently made. They weren't made by giant studios. That changed with "Jaws," the horror genre went mainstream after that. "Jaws" also created the event film. Growing up in the 1990's and the 2000's and being an adult in the 2010's, its hard to imagine a time when summer was a dead time for movies. But prior to 1975, that was the case. The summer simply wasn't used for the big, mainstream, blockbuster movies. When "Jaws" came out in summer of 1975 though, and the world saw how much money it made at the time. There was no going back after that. That's why summer movie seasons take on a personality of their own each year, you can thank "Jaws" for starting that trend.

"Jaws" is more about a giant shark that eats people and three guys on a boat trying to capture it. This is a story about a community not wanting to listen to the obvious. Once its too late, bad things begin to happen in the community. Another great example of that is "The Bay," a movie so creepy I have vowed never to watch it again. Because I simply can't.

Not trying to say "Jaws" is all scary. Richard Dreyfuss makes me laugh from start to finish. There are funny parts, there are thrilling parts and there are parts you can't believe you are actually seeing. It's really no surprise when thinking about it that it became such a sensation and set a new standard for summer movies. It has everything a summer blockbuster requires.

But we all know the best character is Quint, right?