I am really sorry I have not been keeping up with these. Its been a busier month than I originally figured it would be. But here I am with three new recommendations as October keeps chugging along. 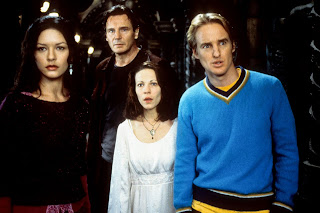 When you watch the 1998 remake of "The Haunting," one thing you'll notice is that the visual effects are really outdated. That's because the movie was made in the late 90's, it makes sense. Recently when I rewatched this one, and I remember being much more scared of it when I was younger and I guess at a time when I believed more in special effects. Those effects may not have aged well, but the genuine creepiness of the film sure did. Its got a small yet effective cast including Lily Taylor, Catherine Zeta-Jones, Owen Wilson and Liam Neeson. Its always great when actors you admire are taking something hyper-real serious. The 90's were defined by teenage slasher flicks, so it felt fresh to watch a modern day haunted house flick from this era. 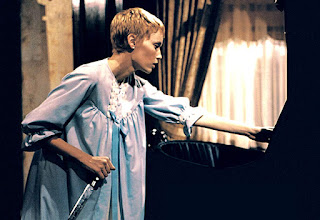 As a first time father, I have been riddled with anxiety, over things that way off for my child and things that are out of my control. It's a roller-coaster being a parent, but the best kind. I have noticed ever since becoming a father that my perspective has certainly changed, and anything regarding children affects me much more now then ever before. "Rosemary's Baby" was always a great horror movie, but it didn't haunt as much as it did recently. The entire movie feels like a dream, and you are never really sure what's real and what isn't, until the end. I love that movie constantly keeps you second guessing what is or isn't real, and for much of the movie, it really can go both ways. There is a creepy atmosphere all throughout, which gives the movie its power. 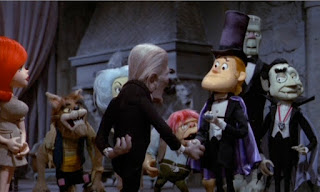 So far during this countdown, I haven't recommended anything that's very age appropriate. I think if kids are going to be into horror, they start to slowly push their boundaries at a young age. If you want something for the Halloween season that is fun for the whole family, track down "Mad Monster Party," a wonderful little stop-motion animation movie about all your favorite monsters. It is literally "Hotel Transylvania" before "Hotel Transylvania." Its a goofy, funny little plot that even features Boris Karloff himself as Baron von Frankenstein. It would be a fun way to introduce the classic monsters to your kids, and just see if horror is a genre that interests them.

Posted by Shawn Hoelscher at 7:44 PM