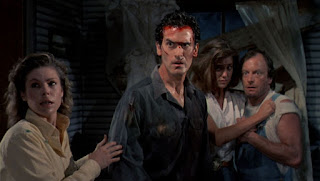 Earlier in this series we looked at "Evil Dead," which was a great little cabin-in-the-woods movie. It launched Bruce Campbell into cult stardom and it created the "Evil Dead" series, which has featured three movies and three seasons worth of TV show on Starz. Possibly other movies on the way as well, maybe. While the first movie was very low budget and gerry-rigged. The second one, well, you can still tell there isn't a whole bunch of money on this thing yet, but Sam Raimi sure did do what he could with what he had.

This sequel is all about excess. There is tons more blood. The angry molesting trees are much more sinister. Things also get much weirder. Take a scene where a possessed deer head begins laughing at our hero, followed by a lamp. Take a scene where Ash (Campbell) gets into a fight with his possessed hand. Yep, that's right, why possess a whole body when you can just possess a hand? Take...well...several scenes where characters are literally showered with blood. Showered with blood. It is quite nuts.

We learn a tad bit more about the Necronomicon, which is the book of the dead. It can summon evil powers that work to possess people and turn them into deadites. Deadites are basically undead spirits that try to possess something to feed on other souls. Much like the first film, Ash takes a girlfriend to a cabin in the woods, and plays an archaeologist reading from the Necronomicon, which brings an evil force to the cabin. What ensues is one of the highlights of the film, as Ash battles with his undead girlfriend.

There is also a side-story about a relative to the archaeologist that Ash is listening to, who is looking for missing pages from the Necronomicon. Which just gives the movie more people to kill. There seems to be two films in one here, one where Ash deals with the cabin by himself and then another about what happens when the others get to the cabin. There is fun all over the place here with imagery that you likely will not forget.
Posted by Shawn Hoelscher at 7:29 PM