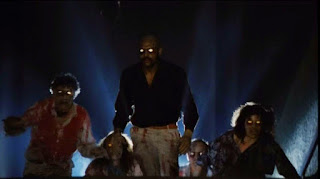 Produced by the horror icon Dario Argento. Directed by Lamberto Bava, the son of the acclaimed horror filmmaker Mario Bava, "Demons" is quite something.

As someone who has been obsessed with movies all of my life, I used to dream up ideas for movies I'd make myself. One thing I always wanted to see was a movie where something bad happens in a movie auditorium. What if a bunch of patrons were in an auditorium were trapped watching some kind of cursed movie? Think about it, its a closed area, no much wriggle room to run. You can maybe hide, but even that is slightly limited depending on the size of the auditorium. It could be great fun in the right hands.

When I thought of this idea, I had no idea that Lamberto Bava's "Demons" was already in the world. The movie begins with several people in a sleepy little, unidentified town are all given invitations to a sneak preview of an unnamed movie. The guy giving out the invitations is wearing a mask, he doesn't talk, and looks like he's got scarring of some kind in places where his mask isn't covering his face. Still, those who go the invitation end up going to the sneak preview. The theater looks like any other theater, except there is a strange mask on display in the lobby. One woman tries it on, gets a scratch. Nothing too terrible though. The patrons enter the auditorium.

It's interesting what we see. We watch the movie-in-the-movie as the characters we just met are watching it too. We experience the same experience they are. A character in the movie-in-the-movie uncovers a mask that looks exactly like the mask on display in the theater's lobby. A character in the movie tries on the mask, they get a scratch similar to the woman. The characters talk about how the mask is vessel for demons, that the mask has the power to turn you into a demon.

Soon enough, the things happening to the characters in the movie, begin to happen to the people watching the movie. The girl that tried on the mask slowly becomes a vicious, killing-machine, monster lady. Anybody that she attacks who is still alive becomes a monster too. Essentially, its a zombie movie in a movie theater. Except its not zombies, its demons. Demons that have make-up so similar to the music video of Michael Jackson's "Thriller," that I had a good cackle every time I watched.

I don't know if the movie was intended to be a comedy, but its hilarious in certain parts. How actors act, how the script is written...it all just made me laugh. It was a fun laugh though. There's kind a screwball mentality to much of the movie, but it sets a fun tone. This might be a good one to throw on if you don't want something super scary. Unless you found the make-up affects in "Thriller" to be scary.
Posted by Shawn Hoelscher at 7:33 PM